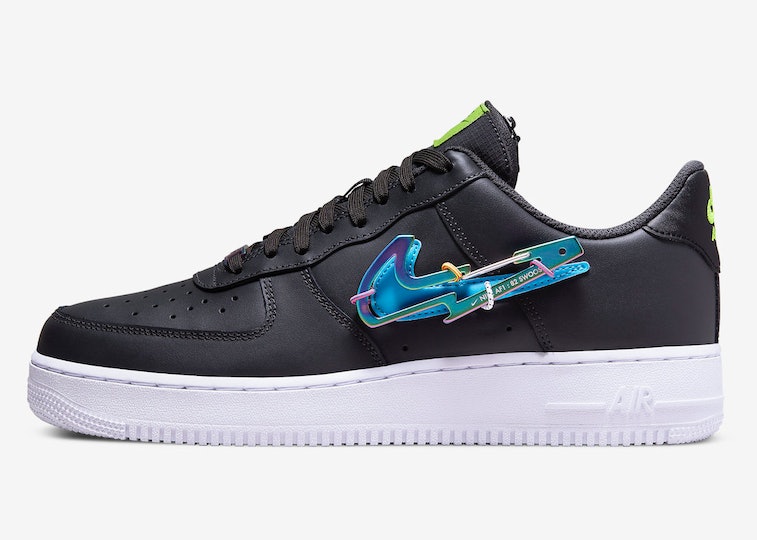 Nike never seems to run out of ways to tinker with the 40-year-old Air Force 1, and now the sneaker will get in on the outdoor trend with a removable Swoosh carabiner.

Images have surfaced of a new Air Force 1 Low variant featuring a much smaller Swoosh than usual, which has a matching carabiner that’s attached to the shoe via bungee cord. These subtle switches bring only a slight deviation from the Air Force 1’s usual formula, but they should be enough to attract ardent supporters of the gorp movement.

Wearing the sneakers with the carabiner affixed has its obvious appeal, but sneakerheads may want to purchase the kicks to take off the metal accessory and apply it elsewhere. The shape of it looks like it could also function as a bottle opener, making it an awesome keychain that just so happens to include a classic pair of sneakers.

Not for climbing — Labeling on the Nike carabiners indicate a max load of 1kg, which comes out to slightly more than 2 pounds and won’t be nearly strong enough to use for any proper outdoor activities. The wider outdoor trend is more often about appearance than actual function, so hardly anyone will be disappointed by a carabiner that serves best as decoration.

Two different color variants for this Air Force 1 have surfaced, including a black and white pair with matching iridescent blue carabiners and lace dubraes. The other pair comes in white with black accents and matte red metal components, and both feature ripstop tongues as a more subtle nod to outdoor gear.

A release date for either of the carabiner-adorned sneakers have yet to be confirmed, but they’re expected to hit Nike’s website in the near future with a slightly increased price of $130. Keep your eyes out and you may just land yourself a dynamic little duo.