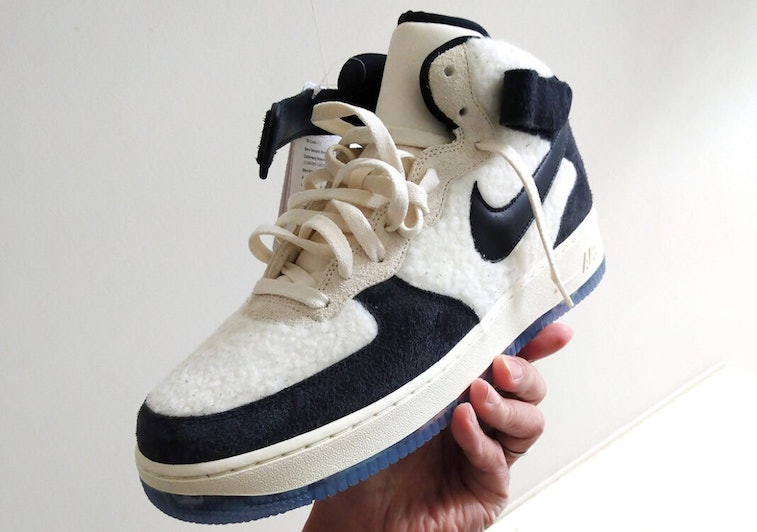 Ever wondered what it feels like to pet a panda? Now you can — kinda, sorta. Nike is gearing up for spring with a mid-top Air Force 1 that pays tribute to everyone’s favorite bamboo-snacking bear.

Bear with me — Nike’s panda-like AF1 Mid has to be one of the most popular color schemes to date. It’s simple, matches everything, and combines both sides of the white vs. black Air Force debate. Though Stüssy played a part in one of its designs recently, this particular Mid replaces the white leather with a clean Sherpa fleece meant to imitate panda fur. The lacing system adopts a more beige tone, while black coats the Swooshes, suede strap, and overlays.

The outsoles are a translucent blue, decked with a graphic of two pandas, text, a Buddha face, and basketballs. To round out the design, the insoles present a panda-loaded graphic that matches the outsoles.

That’s one loved zoo animal — You might remember the Nike Dunk Low “Ueno Panda” from 2015, which resembles this year’s iteration down to the hairy details. However, the original Nike Dunk High “Ueno Panda” was released in even earlier — in 2008 — to commemorate the beloved panda bear Ling Ling at the Ueno Zoo in Tokyo. Though she has since passed, upgrading the 2008 and 2015 versions to present this 2022 Mid means Ling Ling’s tributes are just getting better with age.

Nike’s Air Force 1 Mid “Panda” doesn’t have any official release details just yet, but expect to hear more about it over the next few weeks. Given that the 40th anniversary of the Air Force 1 is this year, Nike is sure to have a few tricks up its sleeve. Some outlets speculate these will be an Asia exclusive. Either way, they sure are cute, and we absolutely need a pair (or two).