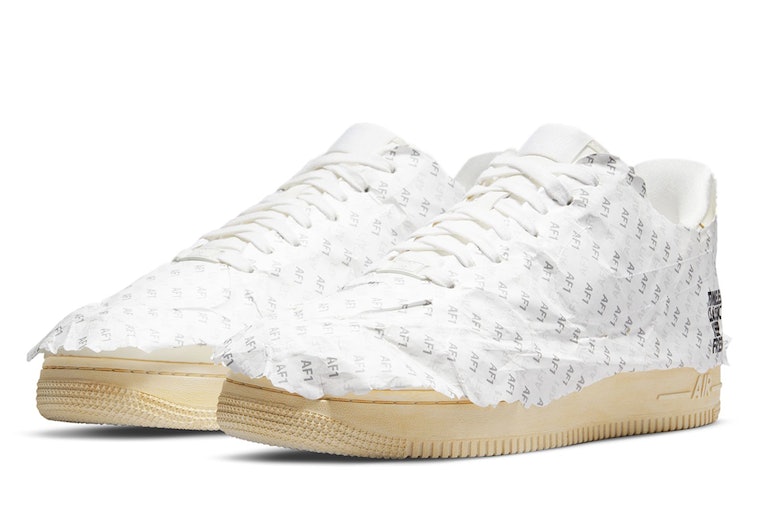 Nike is taking the gravity of keeping your Air Force 1s crisp and clean to the extreme. A new pair nicknamed "Keep 'Em Fresh" wraps the upper in AF1-branded tissue paper, creating a strange and delicate sight. The fragile wrapping toes the line between cheeky and gimmicky, and sneakerheads are likely to be split between the toe sides.

It's hard to imagine the paper shroud will last for any significant amount of time —and once they're inevitably worn away or removed, white leather with cream edges is revealed. The readily visible midsole has been given a faux-worn appearance, which would seem to contradict the whole idea of "keeping 'em fresh." But then again, actual wear will be more difficult to spot when the midsole is already aged, so perhaps it's a shrewd choice.

Tear it off with ease — If anything, the paper cover should be looked at as a form of packaging that may endure for slightly longer than it takes you to remove the Air Force 1s from the box. It appears as if the only thing securing the paper is the laces, which will make tearing it off a cinch.

Getting rid of the repeating AF1 print may break your heart, but you should be relieved to know it also appears on the sneakers' insole. It remains to be seen if the "Timeless Classic Keep Fresh" stamp on the paper appears on the actual shoe, though. The images that have surfaced so far don't show the Air Force 1s heel, so it very well may appear there when uncovered.

Start the countdown to cooked — The whole idea of keeping your Air Force 1s pristine, while baked into the culture, has always remained absurd to me. Sure, some people can afford to replace their kicks upon any sign of wear — but even at just $90 a pop, the flex can add up. In my dissenting opinion, sneakers are meant to be worn and there's nothing wrong with a beat-up pair of Air Force 1s, jokes about TikTok girls aside.

Like a brand new car depreciating in value, a sneaker will never be as clean as when you first put them on. Nike has yet to announce a release date or price for the "Keep 'Em Fresh" Air Force 1s, but that countdown will begin as soon as it does.