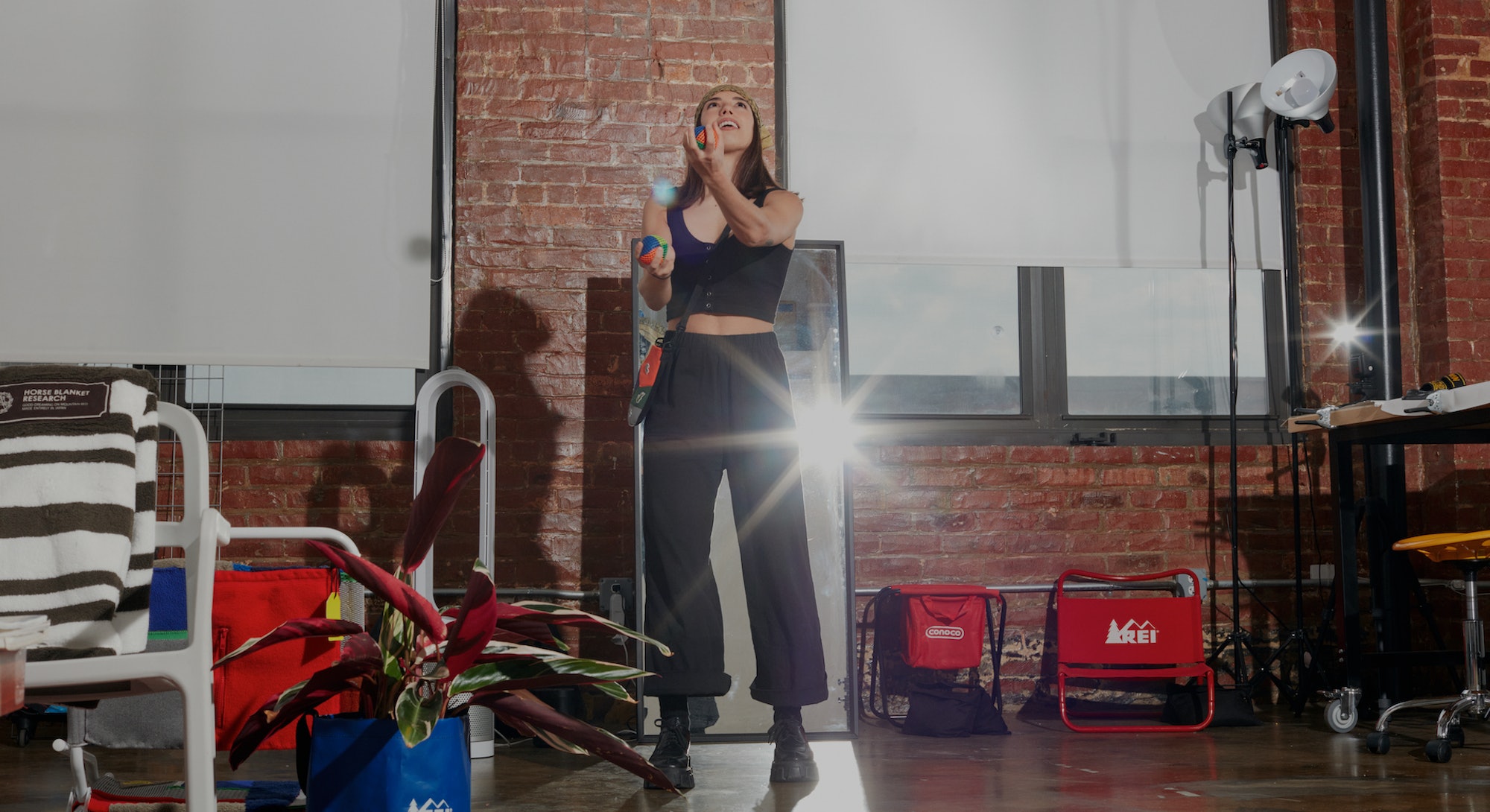 Nicole McLaughlin grew up near the mountains in northern New Jersey, spending her childhood in the small, idyllic town of Verona, just 25 minutes outside New York City.

She remembers her mother zipping her up in North Face jackets, puffer coats, and Patagonia fleeces as a child, and that early brand awareness lives on today in her popular upcycled designs.

“I spent a lot of time outside as a kid, I’d go snowboarding and skiing,” McLaughlin recalled. “I think those puffy jackets are something that really stuck with me. As soon as I’m in a thrift store, when I see a big North Face or Columbia or Patagonia fleece, that’s something I definitely gravitate towards.”

An independent designer who has collaborated with the likes of Puma, Reebok, Foot Locker, and Prada, among others, McLaughlin makes aesthetic creations out of old scraps of fabric, used objects, and secondhand clothes she finds at thrift shops. Iconic sportswear logos appear on her products, such as a utilitarian bralette made out of Patagonia pouches, fuzzy shorts stitched from Carhartt beanies, or Lacoste’s crocodile emblem snarling on a slipper constructed from old polo shirts.

“I think sportswear in general just has such longevity to the clothing itself, the materials that are used like the wovens and the meshes,” McLaughlin said. “And when you go to thrift stores, you find so much of vintage Nike tracksuits and Adidas and Reebok jackets, because there was so much of it made in the '80s and the '90s, and it was used really well too.”

McLaughlin, who grew up playing different sports like volleyball and lacrosse, said there’s a personal angle to the brands she chooses, but that’s probably why others find her work relatable as well. The clothing experiments started as a hobby when she was working at Reebok’s Boston office, first as an intern and then later a graphic designer. She now has over 480,000 followers on Instagram and counting.

“In the sportswear industry, anytime you’re working in a fashion house, there’s just a lot of samples and materials. You review it, you look at it, and you usually discard it after that,” McLaughlin said. “Especially with footwear samples, they only send half a pair, so that was my opportunity to use the [samples] as a base material, because these pieces, these half shoes are just going to get discarded and thrown away. Maybe I can find another use for them.”

“It was definitely scary at first because I didn’t know anything about clothing or shoes.”

McLaughlin worked on her aesthetic experiments after work, cutting and hot-gluing pieces together to make a final product, which she then posted on her Instagram. A graduate of a public university in rural Pennsylvania, McLaughlin didn’t come from fashion connections or a design school background, and she considers herself “super fortunate” for the opportunity to work with Reebok.

“I was 21 when I first started at Reebok, it was right out of college. I was overwhelmed with the amount of knowledge and tools available, I was very, very new,” McLaughlin said. “I was just lucky they saw something in me to hire me. It was definitely scary at first because I didn’t know anything about clothing or shoes. But I don’t think I would have been prepared to go out on my own if I hadn’t worked there.”

McLaughlin slowly learned the ins and outs of fashion design in the corporate environment. And when she returned home each day, she undertook the self-driven enterprise of making garments, accessories and objects out of shoe and clothing samples, and would-be trash.

The first piece McLaughlin made was inspired by Balenciaga’s $2,000 Ikea bag, released in 2017. “It was the age of people reworking Ikea pieces, but I hadn’t seen anyone do it as a shoe. I found a shoe from Reebok, it was a blue sole and matched the Balenciaga bag perfectly. That was really my first attempt at a shoe, but it was very rough, it was very raw. I was hot-gluing and stapling things together, which is how I started doing this, because I didn’t have much knowledge of sewing or using machines.”

McLaughlin posted her Ikea shoe, a blue strappy sandal with the pea-green block letters IKEA branded on it, in April 2017. As Nicole learned to hand-stitch and later use a sewing machine, the shape of her designs evolved, the time it took to make new pieces streamlined, and her audience on Instagram blossomed. Initially starting as a space to share her designs with friends, McLaughlin’s Instagram became a platform through which she could connect with those who took an interest in her work, and other “younger designers and artists.”

Leaving her job in the early summer of 2019 wasn’t an easy choice, and McLaughlin harbored misgivings about becoming a freelancer, citing healthcare coverage as a concern. But it came to the point where she could no longer balance her day job with her pastime, which showed the mark of becoming a profitable business. Settling on a few projects she felt could sustain her, McLaughlin quit her job at Reebok, only to get a serendipitous offer of a collaboration from her former employer.

“It all kind of came full circle, and I paid homage to my time there,” McLaughlin said. The upcycling designer’s collaboration with Reebok consisted of 17 pieces, including bags made out of sneakers, and a shoe exhibiting the white-lettered Reebok logo alongside netting more suggestive of a pouch or sports bag.

Due to McLaughlin’s innovative fashion sense and a clean aesthetic parity unseen in many DIY designers, the 27-year-old freelance designer has become a rising name in sustainable fashion, conducting workshops and advising major brands on how to implement sustainability in their products.

The streetwear industry has recently made efforts towards eco-friendly fashion, such as Nike releasing recycled trash sneakers, and The North Face dropping a sustainable collection for Earth Day this year. Allbirds, the Silicon Valley-based startup infamous for cashing in on the consumer need for sustainability, recently collaborated with Nicole alongside Chinatown Market. The trifold upcycled collection features a vest made with Allbirds sneaker scraps, a bag with Chinatown’s trademark smiley face, and a slipper with a woven pocket on it.

“Sustainability doesn’t have to look so plain and beige.”

In making sustainable fashion, McLaughlin doesn’t see design as a casualty of protecting the environment. “Sustainability doesn’t have to look so plain and beige,” she said. “I really love to consider the design first. When we think about sustainable brands making things, or we’re introducing a sustainable line, it doesn’t sound very exciting or sexy. I’m trying to find a way to make it interesting. It’s really been about the materials that I pick out, and using vintage pieces and other things we’d turn a blind eye to. There is so much value within that, so I'm really just trying to bring more awareness to that.”

Nostalgia for logos of brands that pinnacled twenty or so years ago recurs in McLaughlin’s designs, but so does a relentless passion for sports and streetwear. The designer’s more sporty inventions include a slipper made out of a chiseled basketball, and a shoe entirely fashioned from tennis balls. She also remains infatuated with vintage sportswear, citing the “trims and reflective details” of 1980s tracksuits and jackets as an inspiration, a big contrast from the sleeker silhouette of contemporary athletic attire.

Looking towards the future, McLaughlin anticipates a few upcoming projects, diverse in scope but highlighting her hallmark style. She plans to release a book in 2021, which will showcase unreleased designs, and will have an original piece featured in a museum exhibit. And, most intriguing perhaps, her collaboration with Crocs will launch in the fall.

“I use clogs and slippers as my main silhouette for when I do shoes, so when this collaboration came on the table, I was like, oh wow, this is the perfect canvas for me,” McLaughlin said. “[The collection] was inspired by the outdoors and rock-climbing which is important for me. Growing up, hiking and snowboarding, just being outside has always been something that’s important for me. I wanted to reflect that in the shoe, and there’s a bunch of cool attachments [and pockets], and I think people will really enjoy these ones.”

Designing clothes out of disposable objects has become a compulsion for McLaughlin, and every collaboration challenges what she’s capable of doing, pushing her limits and leading to unprecedented growth. She teases to Input there are more collaborations she can’t yet reveal, but explains it’s her practice of recycling secondhand clothing and aesthetic sense that grounds all her designs.

“Now that I’m here, I don’t think I can see myself leaving. But I do see myself evolving quite a bit. It doesn’t get boring, which is great. I’m definitely going to continue doing it and exploring,” she said.