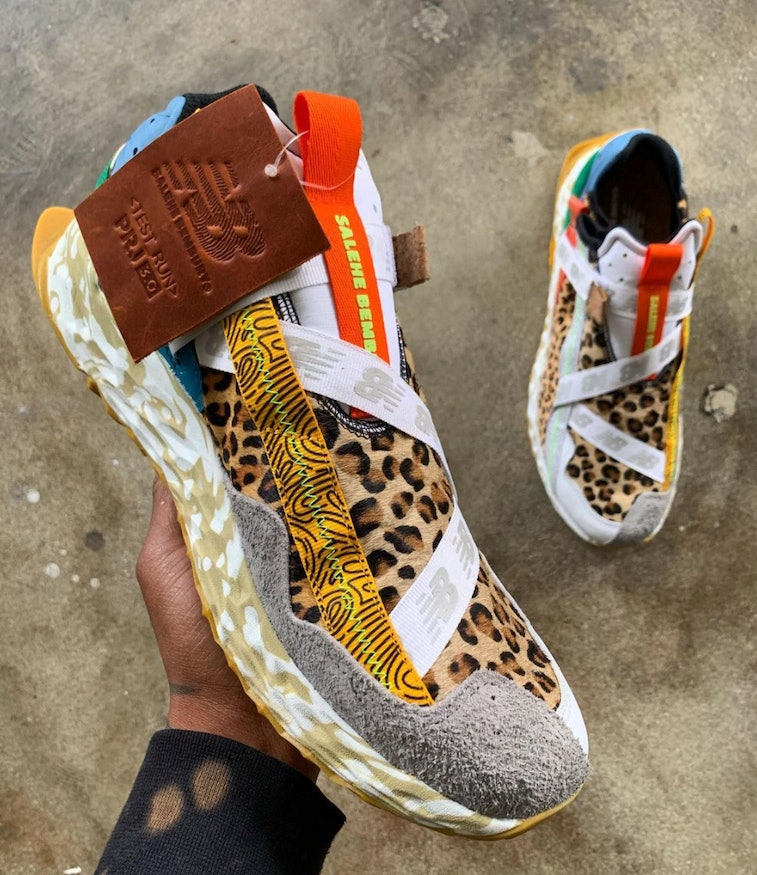 Salehe Bembury is intimately familiar with eccentric sneaker design. With a resume spanning from Yeezy Gap to Versace, the footwear designer has plenty of experience under his belt (and other people’s feet). But shortly after announcing his departure from Versace, where he was vice president of sneakers and men's footwear, Bembury revealed his latest work with a familiar, non-luxury collaborator. After creating the coveted 2002R collection in 2020, the designer is teaming up with New Balance again to rework the brand’s "Test Run Project 3.0" silhouette.

New Balance has slowly begun to catch up with its longtime competitors by revamping its image with hot silhouettes and cool collabs. Casablanca's partnership to launch the all-new "327" sneaker was a key moment in establishing New Balance as a brand to reckon with, and Jaden Smith’s collaborative chunky vegan sneaker certainly didn’t hurt. The brand’s new strategy has proved its sneakers are “with the times” and not just your grandpa’s everyday shoe — now, they’re Salehe Bembury’s everyday shoe too.

Patchwork, prints, and pigment, oh my! — Bembury took to Instagram to tease his take on the New Balance Test Run Project 3.0, which looks thematically similar to some of his Versace designs. Without an inch of wasted space, the shoe boasts both loud prints and bold colors. Leopard print covers a majority of the forefoot and a piece of the quarter, while gray suede and white leather add extra layers on the toe. Hits of light blue and green offer color at the heel.

The shoe’s odd, patchwork-like design is accented — or seemingly held together — by a zig-zagging strap system. Unique to the Test Run Project 3.0, the straps consist of a yellow strip on the lateral side with a fingerprint-like black pattern, and a white strap across the upper featuring repeated New Balance logos.

Of course, the designer has added his own branding, seen on a bright orange tongue tag with a “Salehe Bembury” spellout. It’s complemented by a large co-branded leather tag, which is presumably removed before wear — but with how wild this design is, anything is possible. The shoe is rounded out by a marbled white and gold FreshFoam midsole that provides the wearer with comfort, while a yellow Vibram rubber outsole guarantees durability and grip.

Drop TBD — New Balance hasn’t dropped a release date or pricing information — the model posted by Bembury might even be a sample. But given the designer’s inclination to tease his collaborations on Instagram, we’re confident we’ll see more info in the coming weeks. Hopefully that’ll give you enough time to brainstorm an outfit that matches these insane sneakers.