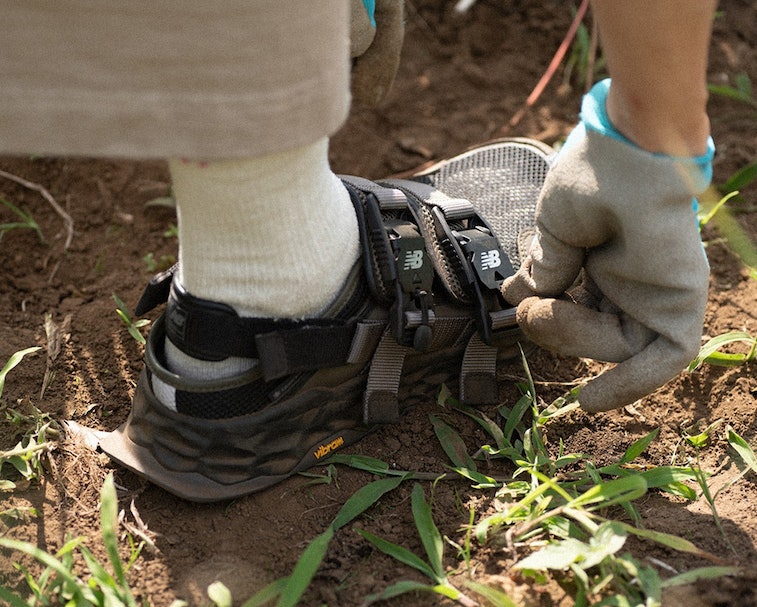 New Balance Tokyo Design Studio and Snow Peak teamed up last summer to launch the three-in-one Niobium Concept 1. A modular system quickly transforms the waterproof hiking shoe into a mule or slipper for what was, in my opinion, the best sneaker release of 2021.

Now, a year later, the two brands are partnering once again to launch a successor to the extremely versatile kicks. The new Niobium Concept 2 is a two-in-one sandal and mule that instantly becomes one of the most intriguing releases of the summer. A heel-strap will keep your foot fully secured for your outdoor excursions, and it can also be removed to become a mule for more casual wear.

Outdoor gear continues to be one of the defining trends in sneakers and fashion, while dudes are also turning to sandals, mules, and other feat-baring footwear than ever. This collision of trends makes the Niobium Concept 2 a perfect shoe for the moment — but its merits go far beyond trendiness.

Magnets for your kicks — A hearty amount of tech is packed into the Niobium Concept 2, including magnetic Fidlock buckles that snap into place in a flash and can be tightened with a pull of the straps. The sandal-mule hybrid also uses the same sole unit as New Balance’s Fresh Foam Hierro trail running sneaker, which combines a lightweight and cloud-like foam midsole with a Vibram outsole for comfort and grip.

New Balance’s Tokyo Design Studio offshoot is where you’ll find the brand’s most innovative footwear, and Snow Peak’s stature as a leading source of highly technical Japanese gorp makes it a natural partner to introduce new silhouettes. After tapping Snow Peak for the Niobium Concept 1’s initial forest color scheme, New Balance went on to release the sneaker in several in-house variants — and we can likely expect the same rollout for the Concept 2.

Japan’s up first — Also like last year is the model’s Japan-only release to kick things off. The Niobium Concept 2 will first release in Japanese Snow Peak stores on June 25, with a global release to follow on July 2.

While we’re still waiting to find out what the two-in-one sandal will cost, don’t expect it to be cheap. The Niobium Concept 1 retailed for a hefty $300, but the price is worth it for what’s one of the most versatile sneakers you’ll ever see.