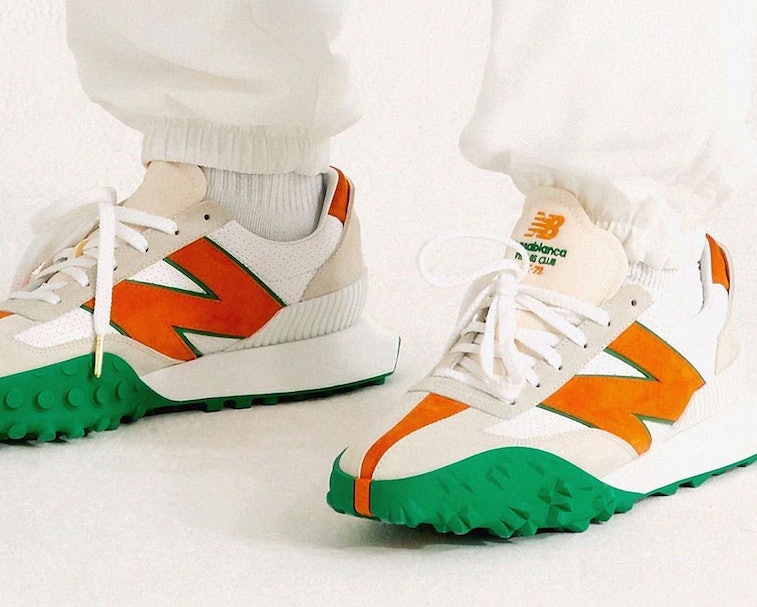 Casablanca's collaboration to launch the all-new "327" silhouette was a key moment in establishing New Balance as a sneaker brand to reckon with in 2020. The April release came as part of an early year hot streak that included heralded collabs with Aimé Leon Dore, No Vacancy Inn, and Stray Rats.

While Nike remained an untouchable monolith that could bring in some of the biggest names in the world, New Balance carved out its own lane by beginning to work with more niche creatives who could breathe new life into the 115-year-old brand. Casablanca, the budding brand from Pigalle alum Charaf Tajer, was a huge get for the brand — and the partnership continues to pay dividends into the new year.

Casablanca unveiled its latest New Balance sneaker during its Fall 2021 digital runway show, and the new silhouette is an evolution of the 327. Coming in the same orange and green color scheme, the "XC-72" gives even more surface area to the octopus-like outsole that extends up the shoe. Besides the increase in texture, the most noteworthy feature of the new sneaker is a midsole that protrudes well away from the heel with hard angles. Once again, Casablanca and New Balance have a hit on their hands.

Modern vintage — Casablanca is at once steeped in the '70s and the present, which is why New Balance chose the brand to kick off its new 327 last year. Joe Grondin, New Balance's head of collaborations, described the sneaker to Input as having a "twisted '70's look" — a label that fits the XC-72 as well.

"Usually new brands like that don't get a place within the official Paris runway schedule," Grondin said of Casablanca, which only launched in 2018. "The fact that they were on the books right away showed us something. We took a risk, but we think that kind of style with Casablanca will continue for the next few years."

At the very least, Casablanca's "vacation and country club attire meets hype" aesthetic continues to endure in 2021. And by hewing close to its first New Balance collaboration, the XC-72 begins to cement a design language for its sneakers that we hope continues into the future.

When can we expect a release? — After debuting at Paris Fashion Week around the same time last year, Casablanca's New Balance 327 was eventually released in April. And even though the XC-72 is tied to the Fall collection, we can likely expect it to follow suit and release some time this spring.

Such a sneaker is too rich to hold out from the warm months of spring and summer, and we hope its release helps to lock in another year of bangers from New Balance.