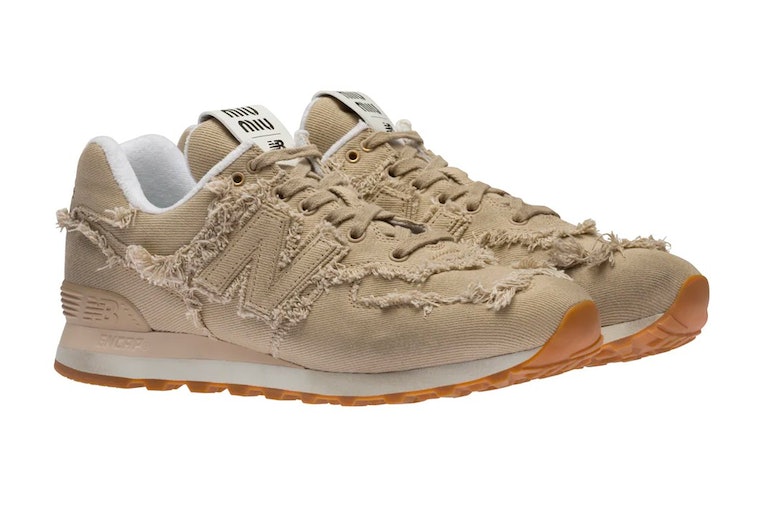 While Prada is now a couple years deep into its partnership with Adidas, its subsidiary brand is making its first entry into the world of sneaker collaborations through another path.

Miu Miu and New Balance have opened up pre-orders for their 574 sneaker, bringing a master class in texture to the classic silhouette. As first shown at Paris Fashion Week last fall, Miu Miu’s take on the sneaker adds raw seams to a trio of tasteful color schemes. Loose threads are everywhere, but look past the fray and you’ll see that the upper is constructed with denim instead of the typical suede.

Off-white, beige, and royal blue constitute the three color options — and it’s the latter two that are the strongest, particularly in a landscape in which neutral color blocking is supremely popular. Pre-orders should ensure that you’ll get a pair if you want one, but their $695 price tag means you could hardly call the sneakers accessible.

Welcome, Miu Miu — Miu Miu isn’t substantially different from Prada, and Miuccia Prada herself also runs the subsidiary label. When asked to define the difference between the two brands, Prada told Business of Fashion she sees Miu Miu as more “naïve” and added: “The solution, when I am working on Miu Miu, has to come immediately, instinctively, spontaneously with whatever is available at the moment. If I think three times, I stop.”

The sister label also isn’t as known for its footwear as Prada, and it’s more prone to ballet flats and heels than sneakers. Engaging in a partnership with New Balance makes the 574s particularly new territory for Miu Miu, and the results remind us more of Comme des Garçons collaborations than Prada’s work with Adidas.

Why Miu Miu decided to get in the sneaker game now remains unclear, besides the fact that just about everyone in luxury is now doing it. Although its New Balance 574s are unlikely to become ubiquitous, they should be an excellent addition to your fit provided you’ve got a Miu Miu budget.