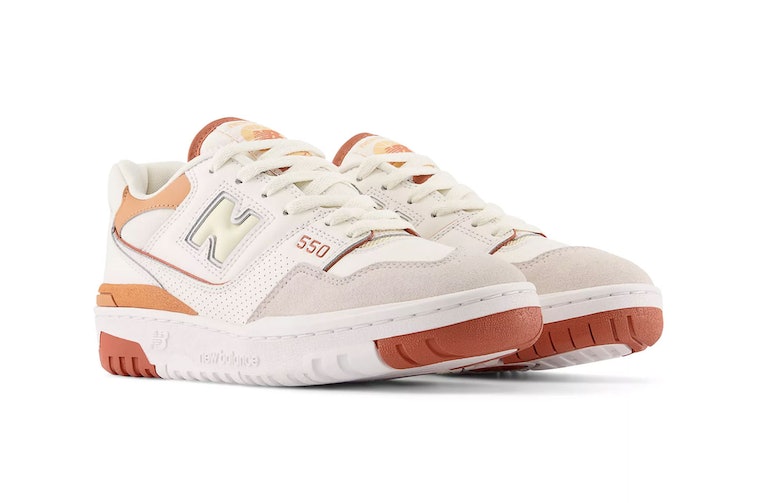 New Balance’s 550 sneakers have exploded in popularity over the past year, thanks in part to hyped collaborations and endorsements from Jack Harlow. Insatiable demand and subsequent resale prices now make the retro basketball kicks nearly impossible to obtain, leaving each release more packed than the last.

As summer — the official season of white sneakers — approaches, New Balance is appeasing customers with another 550 drop. Arriving in its signature two-tone style, the upcoming shoe dons muted orange and brown tones, looking perfectly peachy just in time for warm weather. A touch of suede at the toe elevates this iteration beyond past models.

Peachy keen — To maintain its basketball heritage, the 550 sports its traditional white leather upper, detailed with perforations near the midfoot and mesh at the tongue and collar. A pastel orange shade dresses smaller leather overlays by the collar, as well as the rubber heel mudguard. At the toe, the shoe’s leather panel has been switched out for suede — a first for the 550 — adding a touch of luxury to the hyped sneaker. It’s without a doubt that this feature will increase demand (and resale prices) for the peachy 550.

A reddish-brown shade hits the shoe’s piping on the tongue and sides, also highlighting its signature “550” branding at the forefoot. The same color accents the front and back of the outsole, leaving the middle of the rubber sole white for added dimension. New Balance’s retro “N” logo and heel branding comes in an off-white color to round out the 550’s design.

A slight price increase — As of now, New Balance hasn’t announced when it’ll be releasing its summer-friendly 550, although the pair will be available via raffle on May 16 at 5 a.m. ET on A Few’s website. Like they say, the early bird gets the worm — and this draw may be one of your best chances at copping the in-demand sneaker thanks to its unconventional timing. If you miss out (or sleep in), however, you should have another chance at grabbing the kicks once New Balance lines up an official release.

Each pair of the peachy 550 will retail for $125, a slight increase from its usual $120. The change may be due to supply chain issues, or more likely, growing demand. New Balance hasn’t had a hit sneaker in a minute, and it’s not going to miss out on an opportunity to cash in while it can. With how popular the 550 is, an extra $5 a pair can go a long way.