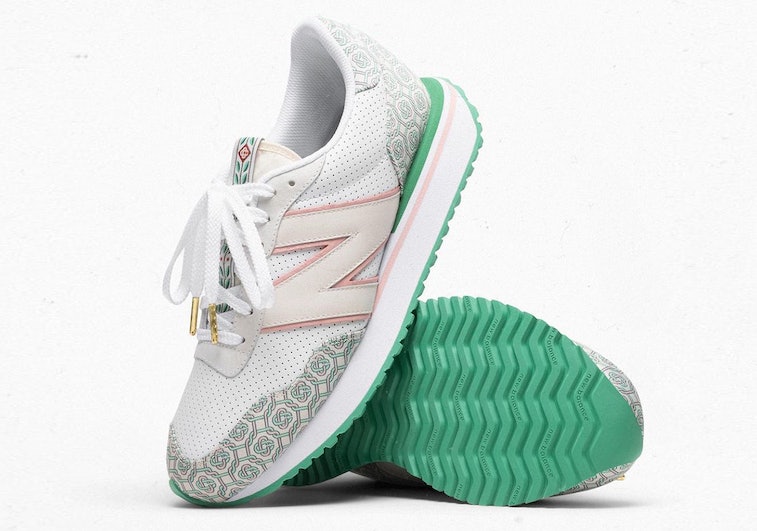 Casablanca debuted its New Balance "XC-72" during its virtual fashion week show in January, but before that hits stores it'll take on another brand-new silhouette from the Boston-based sneaker company.

New Balance's "237" is essentially a stripped-down version of the "327," which Casablanca launched with a collaboration last year. Instead of an octopus-like outsole that extends up the shoe, the Paris-based brand from Charaf Tajer opts for an interlocking Moroccan tile print that's true to his roots. The opulent pattern makes up the mudguard, heel counter, and mustache and is done up in a pink and green treatment that carries throughout the sneaker.

The Casablanca 237 is a tad less audacious than the 327 and upcoming XC-72, but still impresses the brand's fondness for decadent tennis club attire.

Playing the numbers game — Like the 327, the 237 comes in a chunky, '70s-inspired shape with a big block "N" logo. The lugs on the outsole are now less aggressive and don't extend up the back of the shoe. Instead, the midsole protrudes from the heel — but Casablanca did away with this design feature on its own 237. It's also simplified the toe 237's toe pattern, which zigs and zags down to the midsole on the baseline model.

Casablanca's take on the yet-to-be-released silhouette opts for a more luxurious mix of perforated leather and suede, while the baselines models will use the latter material along with mesh and canvas. A leafy stripe that runs up the tongue helps Casablanca's version stand out, and the shoe is completed with gold-tone lace tips.

The kicks should be arriving soon — New Balance's in-house 237 is due to release February 6 for $85, and barring a last-minute surprise, we should expect Casablanca's version to drop sometime after (and at a somewhat higher price).

Just like we did last year, we're spending the early days of 2021 lusting over New Balance kicks. But no longer are we surprised by the brand's resurgence, and Casablanca has now cemented itself as one of its most important partners.