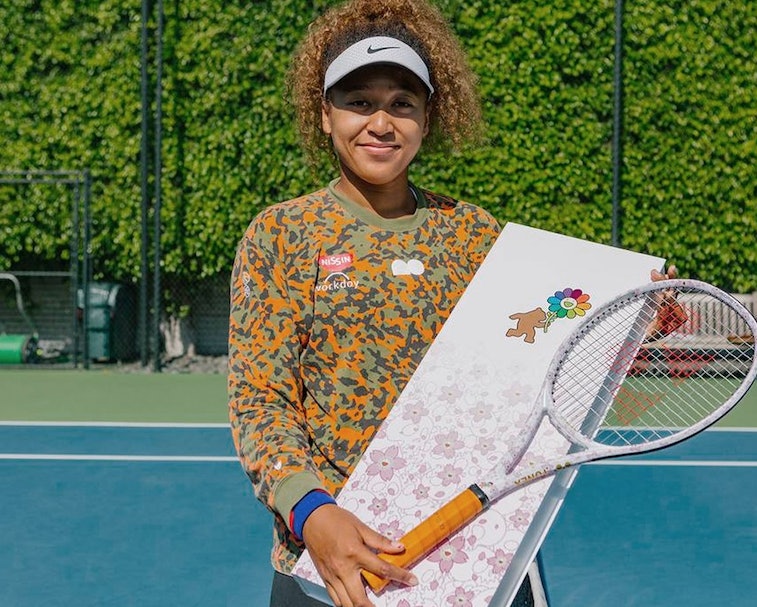 The sport of tennis has become a surprising playground for streetwear. Three years back, Palace outfitted Adidas’ players at Wimbledon, including eventual women’s champion Angelique Kerber. Virgil Abloh has found his sporting muse in Venus Williams, who’s worn Off-White x Nike gear on several occasions and received her own version of “The Ten” Blazer. Now, at this year’s US Open, Naomi Osaka will take the court with an assist from one of streetwear’s favorite artists.

The four-time Grand Slam winner will debut a new racket designed by Takashi Murakami. Made in collaboration with Yonex, the racket and a matching bag feature Murakami’s signature flower motif in pink as well as a cartoon bear holding a single flower.

Osaka called the collab “a dream” in an Instagram post unveiling her hype new gear and in a recent Hypebeast interview revealed how she first linked up with her fellow countryman. “Takashi is one of my favorite artists, and we started messaging each other on Instagram a couple of years ago,” Osaka said. “We were both talking about something cool to work on together, so I suggested that we collaborate on my racket for the U.S. Open... and here are.”

How you can get one — Osaka’s Yonex x Murakami racket won’t go on sale, but a limited number will be auctioned off at a later date in support of her charity, the Play Academy with Naomi Osaka.

The cherry blossom motif is a nod to Japan, where all three parties to the collaboration call home. Cherry trees famously begin to blossom each spring in the country for one of the most beautiful sights to be seen in Japan. It’s the national flower of the island nation and is strongly tied to the concept of “monos no aware,” which encourages awareness of the impermanence of life.

Osaka will inevitably move on to another racket as she continues to play, but for now she has the coolest one in competition — and an object of envy for hypebeasts everywhere.