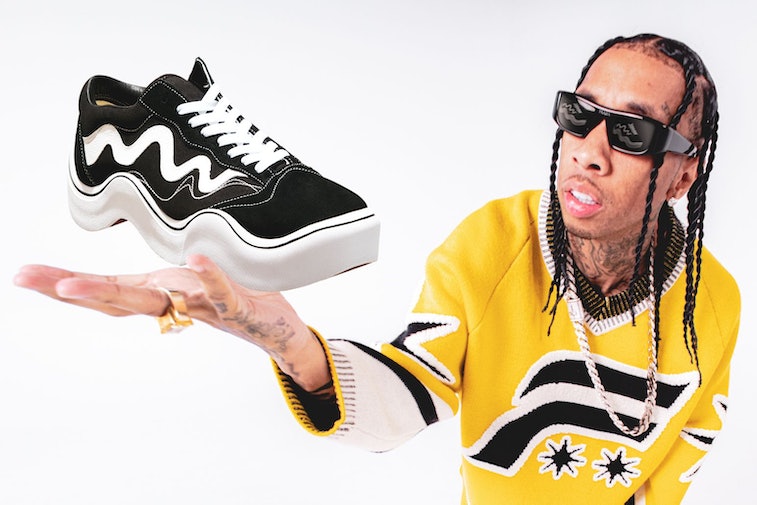 MSCHF has really stepped in it with its “Wavy Baby” sneakers. The shoes, which mimic the look of Vans’ iconic Old Skool sneakers, have landed MSCHF in court, where the Brooklyn-based collective has been ordered to stop creating and distributing its lookalike kicks.

A New York federal judge granted Vans’ motion for a temporary restraining order against MSCHF, according to a report from The Fashion Law. A preliminary injunction has also been issued against the collective as the trademark infringement suit continues.

After the spectacle of last year’s “Satan Shoes,” it’s unsurprising MSCHF would find itself as a defendant again. After all, just take a look at the collective’s name. Still, Vans has acted rather graciously throughout the rollout of the Wavy Baby sneakers, especially given MSCHF didn’t ask the brand for permission to alter its signature design. Prior to filing suit, Vans sent cease-and-desist letters to MSCHF and Tyga, the shoes’ celebrity cosigner (not named in the case). The brand also offered an alternative if MSCHF were to go forward with the shoes’ release, asking for half of the profits from the Wavy Baby drop, as well as for four pairs of the shoes to be delivered to Vans.

Shady Baby — As evidenced by the judge’s orders, MSCHF declined Vans’ offers to compromise. Per TFL, a New York federal court has now ordered the collective to refrain from offering, marketing, and/or fulfilling existing orders for its Wavy Baby sneakers for the duration of the case. Vans claims that its brand will suffer irreparable harm unless MSCHF’s alleged infringement is stopped.

The court has pointed to the “striking” visual similarities between Vans’ Old Skool kicks and MSCHF’s Wavy Baby shoes, as well as to their respective packaging, TFL writes. MSCHF has attempted to argue that while it does make use of similar marks, it has distorted those marks beyond recognition — a claim the court says doesn’t dismiss the collective from possible trademark infringement, as consumers may still be confused about the shoe’s relation to Vans. The collective’s broad campaign of the Wavy Baby shoes, which roped in Tyga and flaunted the exclusivity of the sneakers, has also come under scrutiny.

Wave goodbye to Wavy Baby — MSCHF has tried to defend itself by saying that its sneakers are more akin to artwork “likely to be kept in glass cases or on shelves” as opposed to Vans’ more wearable Old Skool shoes. Yet past receipts, particularly a podcast interview with MSCHF chief creative officer Lukas Bentel, have revealed that the Wavy Baby sneakers were intended to “transcend [MSCHF] into more of a straight sneaker space.” TFL reports that the collective’s numerous attempts to defend its Wavy Baby sneakers as a parody were also denied.

The court has granted Vans’ request for a temporary restraining order and preliminary injunction, forcing MSCHF to refrain from advertising, marketing, selling, distributing, and/or taking orders for the Wavy Baby shoes. The collective must also stop fulfilling existing orders and reverse or cancel orders that have already been placed. As of now, any mention of the Wavy Baby sneakers has been scrubbed from MSCHF’s website, although it’s unclear whether or not the collective will appeal.