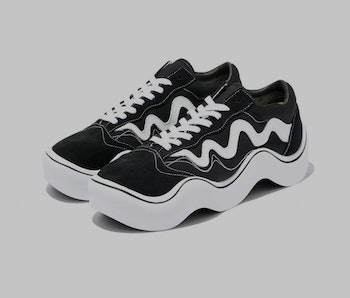 There’s often more to a sneaker collaboration than meets the eye, and when MSCHF is involved, almost all of the traditional rules are thrown out the window. Hot on the heels of a vinyl saw blade with The Weeknd, the Brooklyn art collective has added Tyga to its running list of partnerships. The two are coloring outside the lines with a nonlinear take on a classic Vans skate shoe.

Making waves — Aptly named “Wavy Baby,” the sneakers feature a black upper, a much curvier version of Vans’ signature Jazz Stripe, white midsole, and a gum waffle outsole. Canvas and suede make up the materials, and a red heel tag boasts a “Wavy Baby” logo created just for the occasion. To round out the remixed kicks, the platform soles are given a squiggly shape from heel to toe that looks like it’d take some practice to get used to.

It’s impossible to ignore the sneakers’ heavy resemblance to Vans’ classic Old Skool silhouette, but they’re just unique enough to pass as their own unique creation. MSCHF told Highsnobiety last month that it wasn’t easy bringing them to life and the process involved “a ton of trial and error.” Several manufacturers weren’t keen on getting involved in the Wavy Baby project and rejected MSCHF’s requests immediately after seeing the sketches.

Tyga’s past collaborations have stretched from fast-fashion retailer BoohooMan to Milanese brand Marcelo Burlon to skate label LA Gear, but joining MSCHF’s roster could open the door for more. He also sneakily debuted the shoes during his feature on Doja Cat’s music video for “Freaky Deaky.”

The $220 MSCHF x Tyga “Wavy Baby” sneakers will drop at 12 p.m. EST April 18 via the MSCHF sneakers app. Because the art collective is known for more adventurous and scandalous ideas (see: Satan Shoes, Birkin bag sandals, Chik-fil-A Sunday pranks), these heavily distorted Vans are on the much more tame side.