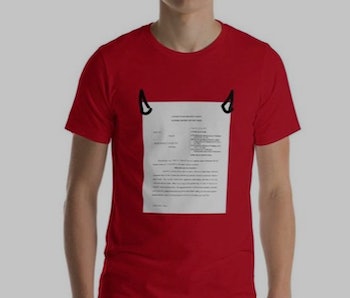 Lil Nas X teamed up with MSCHF to create the “Satan Shoe,” a custom Air Max 97 dressed in black with a bronze Pentagram charm and filled with red ink and a drop of real human blood, causing controversy before it was even officially revealed. And while the shoes sold out in minutes on Monday, those who bought a pair might never receive them as Nike filed a lawsuit against MSCHF over its unofficial Nike-branded sneakers. Shoppers shouldn’t fret, though, because in true MSCHF fashion, the brand has now dropped a “Legal Fees” tee bearing an image of Nike’s complaint.

Released less than 24 hours after Nike’s suit was even announced, the shirt adds to the persistent trolling both MSCHF and Lil Nas X have enacted on the sportswear brand, as well as angry conservatives. The Fashion Law, who first reported on the T-shirt, noted the “Legal Fees” tee was similar to Warren Lotas’ rebuttal after Nike filed suit against it. After a long legal battle, the streetwear brand promoted a “commemorative lawsuit shirt, pencil, and bumper sticker” to consumers who pre-ordered Lotas’ “counterfeit” WL Pigeon or WL Broccolini sneakers. MSCHF’s tee, on the other hand, comes prior to any court visits — and may be a bid to raise money for the lawsuit it now faces.

Hellbent — Dressed in red — to match the Satanic theme of its Satan Shoes, obviously — the tee proudly displays the first page of Nike’s legal complaint. Mockingly, MSCHF has added a pair of drawn-on devil horns to the image, which claims “trademark infringement and dilution, false designation of origin, and unfair competition.”

After those unhappy with the shoe started to say they would boycott Nike over the creation, Nike made sure to claim MSCHF’s shoe was “done without Nike’s approval or authorization, and Nike is no way connected with this project.” A spokesperson for Nike told Input that the company wanted nothing to do with the shoes. “We do not have a relationship with Little Nas X or MSCHF,” the brand said. “Nike did not design or release these shoes and we do not endorse them.”

Regardless, according to multiple consumers, who received shipment confirmations, MSCHF has started dispatching the lawsuit-inducing footwear. The brand has also announced it is giving away the last, 666th pair of its Satan Shoes on Twitter.

MSCHF managed — It’s not clear yet whether MSCHF will be able to continue its, well, mischievous ways for much longer. Currently, the tweet announcing its “Legal Fees” tee has been deleted, and the shirt can’t be found on the brand’s website or app. The giveaway for MSCHF’s last pair of Satan Shoes, however, still stands — a feat that might be more offensive to Nike than the “Legal Fees” shirt itself. Only time will tell if MSCHF ends up as damned as its sinister sneakers.