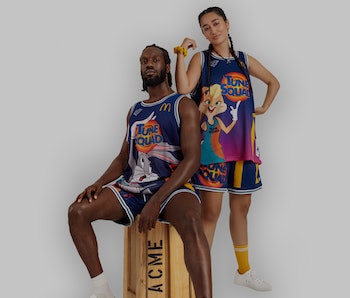 Space Jam: A New Legacy is the cash cow that damn near every brand is getting in on. Nike, of course, has cooked up a range of sneakers and apparel — and more than 200 other brand collaborators are releasing products for the LeBron James-starring sequel.

Now joining the merchandising event of the year, if not our lives, are McDonald’s and Diamond Supply, who’ve teamed up for a capsule full of Tune Squad apparel. The fast food giant did actually release Happy Meal toys for the original Space Jam in 1996, and James was an endorser for the brand until 2015. Still, it’s funny for McDonald’s to be mentioned anywhere near this generation’s GOAT, who spends $1.5 million a year on his body and said the last time he ate anything from the Golden Arches was when he was 24 years old.

With the LeBron association only implied, the capsule instead focuses on the Looney Tunes characters who play for the fictional team. The squad appears together on T-shirts and hoodies, while Bugs is given the lone billing on a basketball jersey with McDonald’s and Diamond Supply branding appearing on both shoulders. Rounding out the lot is a matching pair of basketball shorts that sees an oversized McDonald’s logo wrapping around the leg.

Each piece of merch is wearable enough, but with so much product releasing for the Space Jam sequel it’s hard to make a case for one brand’s offering over another. The original film birthed the namesake Jordan 11s that are one of the most iconic sneakers of all-time, but now that the branding exercise has been super-sized nothing sticks out as especially meaningful.

At the very least, by flooding the market, Warner Bros. is ensuring that anyone who wants Space Jam merch can get it in one form or another — accessibility that’s merely a by product of this shameless cash grab. If these Diamond Supply and McDonald’s goods are indeed the Space Jam merch for you, then you’ll be able to gobble them up on the former’s website at 12 p.m. EST come July 3.