Master P and Baron Davis are interested in buying Reebok 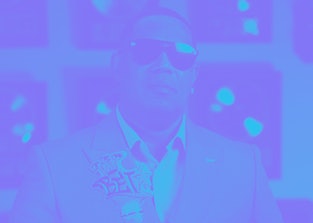 The reported asking price for Reebok.

As Adidas looks to offload Reebok, Master P and Baron Davis have emerged as potential buyers. The two confirmed to Forbes their interest in acquiring and revitalizing the struggling brand. At the height of its success in 2005, Reebok was purchased by Adidas for $3.8 billion. Now 15 years later, the asking price is reportedly down to $4.5 billion.

Beyond the intrigue of what Master P and Davis, two successful entrepreneurs in their own right, could do with Reebok, the deal would be noteworthy for bringing Black owners into a space bolstered by Black culture but headed by White executives. "As we focus on turning Reebok into a lifestyle brand not just a basketball brand, our most important initiative will be to put money back into the community that built this company," Master P told Forbes.

Reebok's struggles — When Adidas first acquired Reebok, the latter brand outfitted both the NBA and NFL and had deals with Jay-Z and G-Unit. Now, Reebok has nowhere near the same cultural cache and its sales reflect that. Reebok brought in a quarter of Adidas' revenue just three years ago, but now it only accounts for 6.4 percent of its parent company's business. In 2018, Adidas wrote down Reebok's value to just $995 million.

Master P and Davis, the latter of which was once signed to Reebok, could turn around the ship by focusing on the lifestyle space and, more specifically, hip-hop. Reebok can be seen as a pioneer for its early deals with Jay-Z and G-Unit, long before Kanye West signed with Nike and then Adidas. Nike was once reluctant to partner with non-athletes, but now its roster includes Travis Scott and Drake, two of the biggest musicians in the world. According to Forbes, Scott likely earns $10 million a year from Nike.

Given his background, Master P would be a trusted figure to bring in a new wave of rappers to Reebok. After founding No Limit Records instead of signing with a major label, he's long been a champion of Black-owned businesses. Davis, on the other hand, has found success outside of basketball with an early investment in Vitamin Water and his own company, Baron Davis Enterprises.

Already showing positive signs for Reebok is its recent appointment of Pyer Moss founder Kerby Jean Raymond as global creative director. Raymond won the 2020 CFDA award for American Menswear Designer of the Year and, as a collaborator, is behind some of Reebok's most noteworthy sneakers in recent memory.