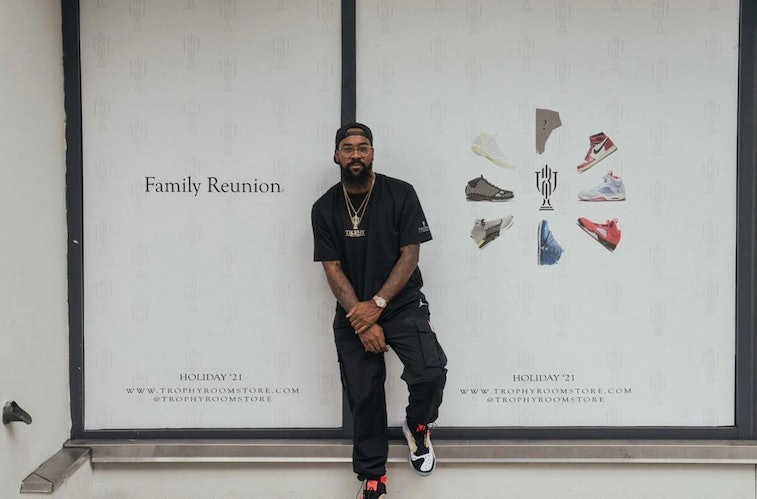 Trophy Room, the Florida sneaker boutique owned by Michael Jordan's son Marcus, may have another collaboration with Jordan Brand in the works. Marcus Jordan teased in a recent Instagram post that “we back soon,” posing in front of a new Trophy Room store covered in “Family Reunion” promotions hinting at another Jordan x Jordan partnership. A window graphic behind him also displays a grayed-out silhouette — which looks a lot like an Air Jordan 1 High — only fueling speculation more.

After the original Trophy Room store in Orlando’s Disney Springs closed in May 2019, the boutique moved to a new downtown Orlando location, set to open this holiday season. The launch of the new shop, as well as its window displays, suggest a sneaker may inaugurate the opening.

Following some shady footsteps — Back in May, Jordan had already hinted at another Trophy Room x Jordan Brand collaboration, writing on Twitter that he “had a ‘design huddle’ with the Jordan Brand team.” His connections to the Nike brand are familiar, to say the least, so it wouldn’t be surprising if he had another co-branded sneaker in the works.

Despite his legacy in the sneaker industry, however, Marcus Jordan isn’t necessarily beloved by sneakerheads. His privilege has certainly aided his career — his boutique was able to collaborate with a huge retailer despite only launching in 2017 — and Jordan’s last partnership with Jordan Brand was rife with “backdooring” accusations.

“Backdooring” references a process where retailers bypass a formal release process and sell pairs to friends, sometimes at an inflated price. And when resellers were seen flaunting huge quantities of Trophy Room’s “Freeze Out” Air Jordan High in February — before the boutique has even officially announced release details for the sneaker — consumers were understandably upset. Already, the exclusive drop had been made even more limited.

Freezing out resellers — Trophy Room’s tarnished reputation seemingly hasn’t affected Jordan, who maintains he didn’t backdoor the pairs and continues to post updates about the new boutique. Yet Nike and Jordan Brand, which were blamed for the disappointing drop as well, may limit just how many sneakers are backdoored this next time around — unlike Jordan, the two brands are careful about what affects their character.

Still, any upcoming Trophy Room and Jordan Brand collaboration will be just as limited as the first, with both retailers launching the sneaker via lottery-based draws. Let’s hope this time, there’s enough to go around.