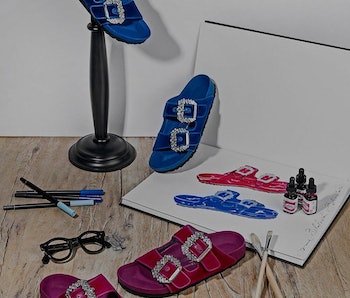 Monolo Blahnik, champion of the aspirational heel, is joining high-fashion’s turn to loungewear. His namesake label is joining forces with Birkenstock, with the two brands ready to make the Boston clogs and Arizona sandals more luxurious.

Not your average clog — Set in a bold color palette of fuchsia, royal blue, or black, each monochrome pair swaps out Birkenstock’s signature outdoorsy, cork-colored vibe for more premium materials. Plush velvet makes up the fuchsia and blue pairs, while a high-end leather is reserved for black. Whether you’re a Boston on Arizona fan, each of the silhouettes is available in all three colors. And to cap off the Blahnik touch, each pair is given oversized crystal buckles.

Birken-Blahniks — If you’re a Sex and the City fan, you might draw a line from Carrie Bradshaw’s Hangisi wedding heels to the blue footwear in the Birkenstock collaboration. Blahnik confirms he is down to dress things down, though, as he reveals in a press release that he reaches for a pair of Bostons when he’s not wearing his own designs. His niece Kristina Blahnik, the brand’s current CEO, also appeared in Birkenstock’s Spring/Summer 2020 campaign — providing further evidence of the Blahnik family’s love of Birks.

This isn’t the first time Birkenstock has lent its shoes to a luxury brand either, as Dior, Rick Owens, and Valentino have added their names to collabs in the past. Given that a private equity firm backed by LVMH bought bought the formerly family-owned company last year, Birkenstock may be opening up to even more high-end friendships in the future.

Coming soon — Though Boston clogs and Arizona sandals typically cost somewhere between $100 to $150, Blahnik’s spruced up versions jump to a range of $750 to $810. The first of two releases will drop March 24, while the second is slated for June, bot through the Blahnik and Birkenstock 1774 websites. What better time to toss and replace that pair of Birks you’ve had since college?