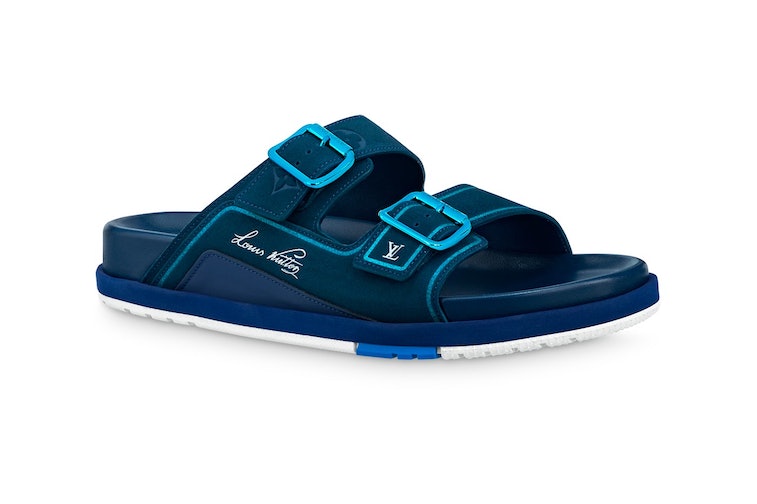 Birkenstock, the sandals my 51-year-old stepdad was just recently waxing poetic about, have unexpectedly become a favorite among the men’s style crowd. For proof of how far the footwear previously worn by patchouli-smelling types has come, just look at what Louis Vuitton is doing.

Virgil Abloh and co. have introduced the “LV Trainer Mule,” which brings over motifs from the LV Trainer Sneaker while still looking a hell of a lot like Birkenstocks. There’s no reason to cry foul over plagiarism here — it’s just that we’d be remiss not to mention that Birkenstocks would serve you every bit as well as a new Louis Vuitton sandal for a tenth of the price.

Sometimes, expensive isn’t better. But if you’ve got paper like that and still want the LV Trainer Mule, just go ahead and admit you’re doing it for the logo.

What’s it made of? — Calf suede and leather are used for the sandal’s upper, sitting atop an anatomical footbed. The rubber outsole is pulled directly from the LV Trainer, as are the two initial color schemes the LV Trainer Mule release. One is a tonal blue makeup with bright blue buckles and trim, which we have to admit is quite sexy. The other uses the same metallic foil leather as the gaudiest of LV Trainers, and well, it doesn’t look any less ridiculous here.

“Louis Vuitton” is signed onto the side of the strap unit, while symbols from the luxury house’s Damier pattern appear across the straps themselves. “LV” is then embossed into the footbed, and the buckles, too, are engraved with the brand name for good measure. So fret not, no one will miss the fact that you’re wearing Louis Vuitton sandals.

It’s guap, duh — Louis Vuitton’s new LV Trainer Mules are out now and with a $1,020 price tag that can’t come as a surprise. We’re all here for more options encouraging dudes to rock sandals this summer, but we again have to stress that you can pick up a pair of trusty Birkenstocks for around $100.