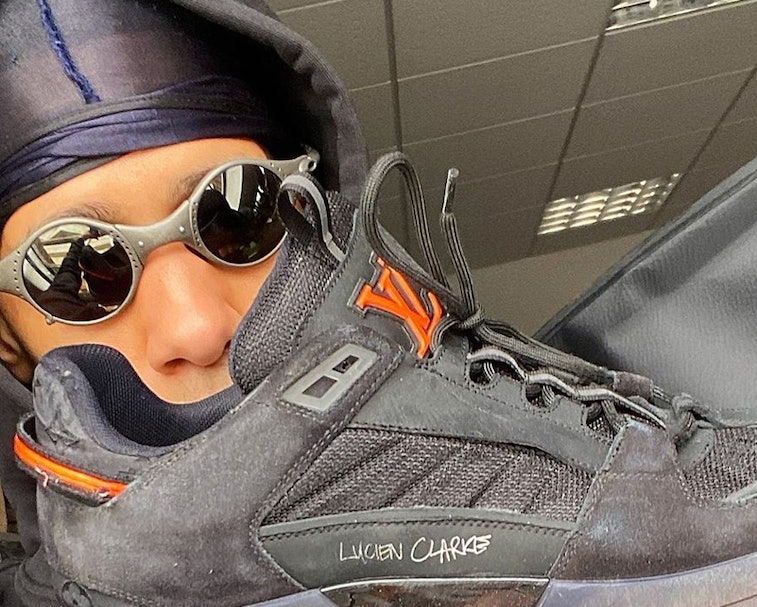 You can't talk about streetwear without talking about skateboarding. That's what makes the latest Louis Vuitton collaboration under Virgil Abloh so special.

In the first deal of its kind in the history of the French luxury house, Louis Vuitton has signed pro skater Lucien Clarke and is giving him his own signature sneaker. The announcement came through Instagram Monday and is accompanied by an exclusive advertising campaign in Thrasher.

Abloh says he gave Clarke, who's also affiliated with Palace, "free reign" to design his pro model, the result of which is a chunky silhouette that references skate shoes from the early 2000s. The upper, made primarily of mesh and suede, is adorned with Clarke's name, while elements from Louis Vuitton's signature monogram pattern feature throughout. On the tongue is a big, fat "LV" — which will soon make this the biggest flex at the skate park.

LV is now all-in on skateboarding — While Louis Vuitton famously collaborated with Supreme in 2017 under Kim Jones' stead, this marks a deeper commitment to skateboarding from the French atelier. This will be its first shoe designed specifically for skateboarding, and finding its ads in the pages of Thrasher is a sight to behold.

Abloh is often a target for criticism, much of it deserved, but this counts as one of the cooler things he's done at Louis Vuitton. His menswear collections for the brand have borrowed heavily from streetwear, and signing Clarke helps support the sport that made so much of it possible.

Clarke has been walking in Louis Vuitton shows since Abloh's 2018 debut, and Abloh has often used the platform to give exposure to people who've typically gone unsung in the world of luxury. Futura, a pioneering graffiti artist, was given the opportunity to work live on stage while models walked the runway for the FW19 show. By creating an LV skate shoe, Abloh once challenges the norms of what constitutes luxury and who it's for.

Clarke is quite stoked — In his post announcing the partnership, Clarke acknowledged the gravity of the moment with an effusive caption. "Where do I start?" he wrote. "I designed my first pro shoe for Louis Vuitton and shot a skate advert for Thrasher. NBD! This is only the beginning."

Indeed it is, because we still have no idea when the shoe will release (or just how prohibitively expensive it'll be). Clarke said a video part will also drop before the end of the year, which will mark another Oh shit, this is crazy moment.