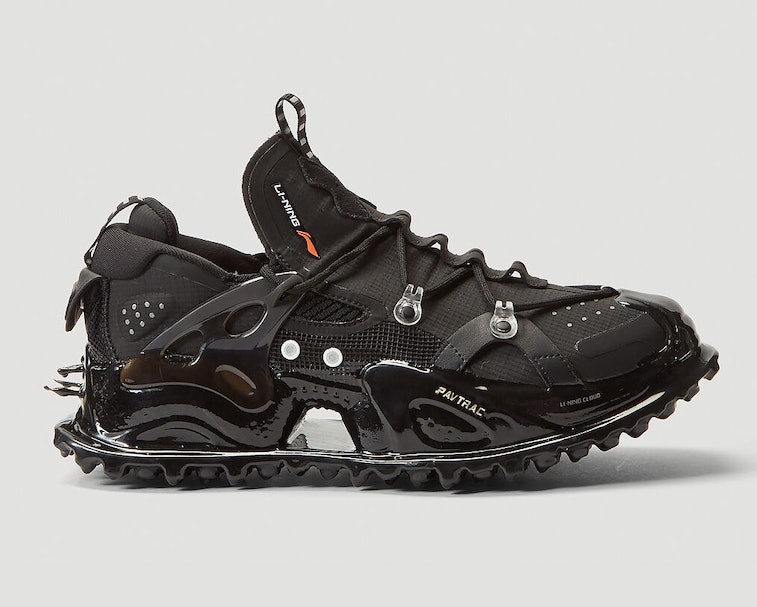 As Li-Ning prepares for its digital Paris Fashion Week show this weekend, the brand's latest crop of eye-popping sneakers have already surfaced. The Chinese brand has made a habit of producing vociferous sneakers over the past few years, but it may have outdone itself for FW20.

The most fetching of all are a pair of hiking sneakers, consisting of the all new Titan Halo and a reworked Arc Ace. Both are predominantly black and uncannily glossy for shoes designed to hit the trails, and the latter includes Gore-Tex lining to thoroughly combat the elements.

Diving into the tech — The Titan Halo looks as if it's sitting on a platform due to the contrast between its large, glossy overlay panels and metal-lined midsole. Its tread is just as aggressive as the upper, which is constructed with a ripstop weave and features no shortage of straps. An adjustable cord lacing system maintains the outdoor sensibilities, and there's a Venom-esque grouping of rubber antennas that protrude from the heel. All together, the Titan Halo is something like a goth-approved hiking sneaker, and it looks like something that could have came from Matthew Williams or Rick Owens.

The reworked Arc Ace Gore-Tex looks more like what we expect from hiking sneakers but deviates widely on the upper from previous Arc Ace low tops. Its webbed pattern looks suitably technical and is made of nylon that sits along ripstop weave. A splash of color comes from a yellow and orange gradient on the heel, which is repeated in an oversized "Gore-Tex" hit on the inside of the shoe. Like the Titan Halo, it also features a cord-lacing system, in addition to a padded tongue and compression-molded sole that'll help it stand up to rigorous terrain.

Rounding out the collection — Another new silhouette is called the Windracer, and it looks eerily similar to Nike's ZoomX sneakers with its thick and protruding midsole. Up top, its lacing system is concealed underneath a translucent and breathable upper rendered in neon yellow. It has all the makings of a running sneaker but is more likely to be worn in an everyday rotation.

The rest of lineup consists of new color variants of the Rider Aces and Arc Ace high tops. You can pre-order each of these sneakers through LN-CC's webstore, and look for more information to come out when Li-Ning hosts its virtual show this Saturday, July 11.

This article was originally published on July 6, 2020