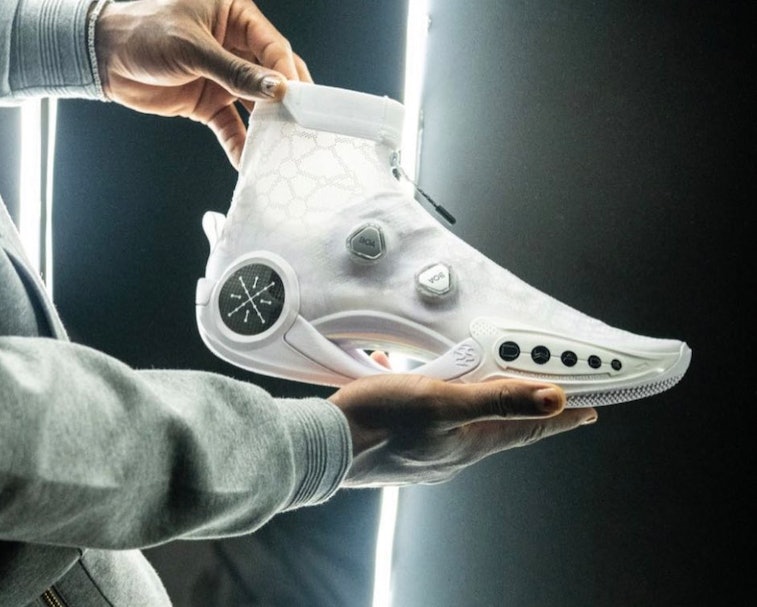 Dwyane Wade's newest Li-Ning sneaker hasn't yet progressed from the stage of teasing to a release cycle, and yet it's already plagued by the sense that we've seen it before.

Wade inked a lifetime deal with the Chinese footwear brand two and a half years ago, and the "Way of Wade 9" will be the second sneaker to release after he retired from the NBA. Throughout his career, he had deals with shoemakers like Converse and, later, Jordan Brand — and it's the latter's shoes that hew too close for comfort.

The Way of Wade 9 looks like Li-Ning tossed in design elements from the Air Jordan 2010, which Wade himself played in, as well as the Air Jordan 34 and 35. Circular TPU cut-out windows were the defining feature of the 2010, which appears to have been replicated in the giant circle that brings together the upper and midsole. The similarities could be chalked up to coincidence were it not for the other elements that appear to be copycats and Li-Ning's history of copying Nike and Adidas.

Recognize the midsole? — Jordan Brand carved out a concave midsole, above which sat an "Eclipse Plate" for stability, on the Air Jordan 34 on the way to making it one of the lightest sneakers to ever come out of the line. The hollowed-out midsole continued to its successor, the Air Jordan 35, which features an even more visible Eclipse Plate and a sort-of sunrise striped panel to highlight what Jordan designers call "the tunnel."

The 34 and 35 are the two most recent sneakers from the all-important Air Jordan signature line, so there's no way Li-Ning could avoid comparisons. Jayson Tatum and Zion Williamson, two of the league's most promising stars, have worn them and cemented the sneakers in the minds of basketball fans.

It's too bad, too, because Li-Ning utilizes an innovative BOA Fit dial cord lacing system that allows the wearer to turn dials for a quick and precise fit. But even that technology is dragged down by a zipper that enshrouds it, which has drawn comparisons to the Air Jordan 28.

Nick DePaula, the sneaker reporter for ESPN who revealed the latest Way of Wade 9 images on Twitter, acknowledged the similarities — saying what we can all see and probably ruffling some feathers with the brand that gave him the scoop.

Li-Ning has a history of this — Li-Ning, which was founded back in 1989 but began a period of revitalization and growth in 2010, has long been accused of copying the footwear giants it seeks to compete with.

The brand's lightweight "Fei Dian" running shoe was seen as a copycat of Nike's record-breaking Vaporfly marathon sneaker, and one of its basketball sneakers from 2018 looked a hell of a lot like Adidas' Crazy BYW. That same Adidas shoe also appears to have inspired, at best, the hiking-basketball hybrid Ace from Li-Ning.

In the lifestyle space, Li-Ning's "Cosmic Dust" also appeared to pull heavily from the Adidas Prosphere. When Li-Ning held a runway show last fall, one of the sneakers it sent down the runway looked a lot like Nike's and Sacai's collaborative VaporWaffle. And outside of the sneaker giants, Versace has seen its Chain Reaction sneaker mimicked by the Arc Ace.

Li-Ning still lags behind Nike and Adidas — and even Anta — in its home country of China. But it's market share of 5.3 percent in 2018 is still miles better than in the United States. And if that's going to change, the brand is going to have to stop churning out such obvious ripoffs.