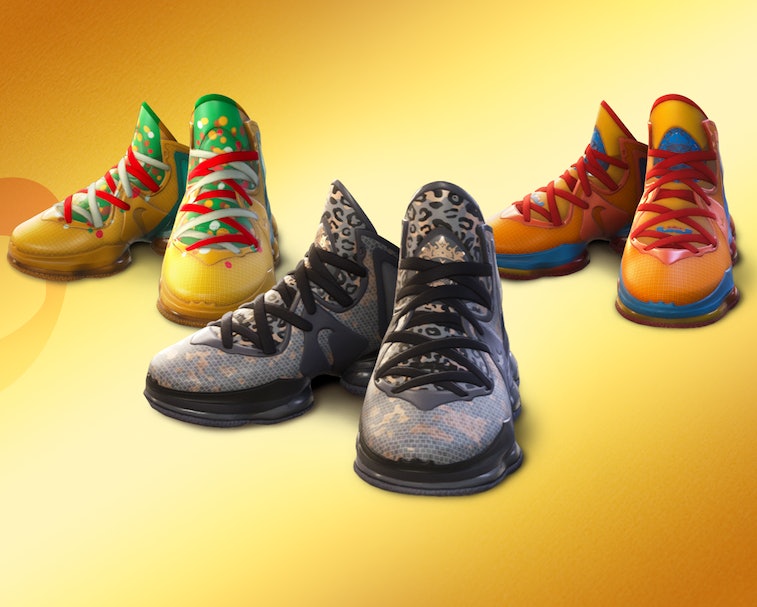 The great Space Jam merchandizing bonanza has brought LeBron James to Fortnite. The modern day GOAT and only possible player to follow up Michael Jordan in the film’s sequel will become a playable character beginning Wednesday, July 14. Numerous outfits and sneakers will become available in-game as part of the promotion, including a version of the Nike LeBron 19 that’ll also go on-sale in real life.

Three-brand synergy defines the upcoming sneaker, with a color scheme to match the Toon Squad uniform James will wear in Space Jam: A New Legacy and now Fortnite. Nike has begun teasing the “Uniform” LeBron 19 on the SNKRS app, with a slide story saying only that the release is “coming soon.”

By bringing an IRL component to their Fornite collaboration, it seems James and Nike have followed the lead of Travis Scott. The most brand friendly musician working partnered with Fornite himself last year, leading to a wide range of merch that included a NERF gun. Of course, Space Jam has already had no problem throwing itself in the lot of numerous other brands — more than 200 to be precise.

The most shoppable movie of the year — The highly anticipated Space Jam sequel cannot be avoided in stores and now in one of the most popular video games in the world. Nike, as well as subsidiaries Converse and Jordan Brand, has an even wider assortment of Space Jam sneakers slated to release soon. Amongst other collaborators have been BAPE, McDonald’s, and more brands than we could possibly cover on this site.

Now, yet another sneaker has been thrown into mix — adding the cash cow buzzword that is Fortnite. Whenever it does release, it’ll inevitably sell out sooner than you can say, “What hasn’t Space Jam touched?” But hey, at least everyone will be able to have their character wear the kicks in Fortnite, as well as another “Taco Tuesday” makeup for the LeBron 19 that we’ll probably never see in real life.