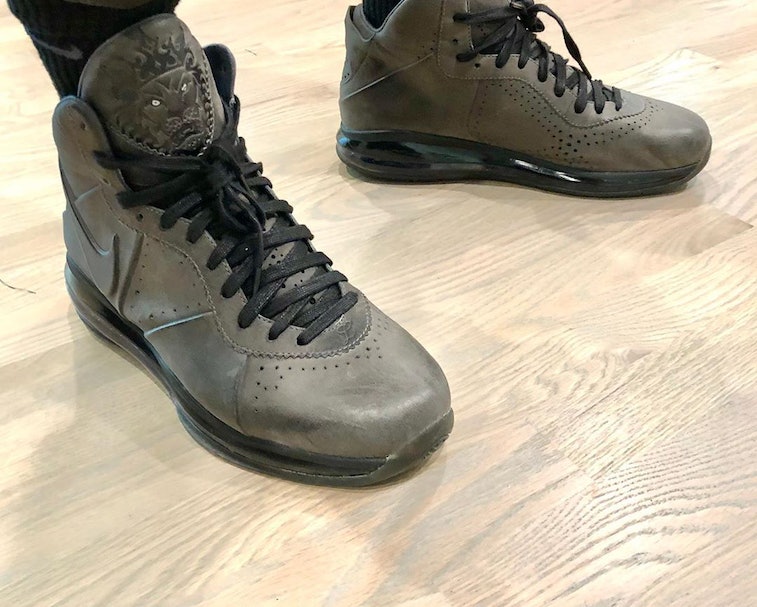 Yesterday was the 10th anniversary of LeBron James announcing his departure for South Beach in a televised special called The Decision, which spawned a host of retrospectives from the sports content machine. The decision to leave Cleveland for Miami reverberated through the league, leading to four consecutive Finals appearances and two championships for the Heat, as well as a new era of players exercising their autonomy in where they play. That has all been well hashed out well before universally accepted but ultimately arbitrary peg of an anniversary, but what we didn't know until now is one of the ways in which LeBron's decision impacted Nike.

Footwear designer Jason Petrie used his personal Instagram account to share an alternate history in which LeBron continued to play through Ohio winters instead of going to the Sunshine State. Nike had planned on making the LeBron 8 into a winter boot that could also be played in. The sneaker would have been extremely limited with only 250 pairs released, and now it's possible Petrie has the only one in existence.

Could it have worked? — The idea of an on-court sneaker and winter boot hybrid is kind of ridiculous, but Nike technology called Vac Tech would have been the key to making it useful for both. Vac Tech is a thermo-molding technique that uses vacuum compression to construct the sneaker without the need for visible seams. This would have helped the LeBron 8 to effectively combat the winter elements without getting too bulky, although we do still question how that rugged leather would feel while playing.

At the very least, this winterized LeBron 8 is a fun thought experiment. And when compared to the most coveted LeBron 8 release, it goes to show how much sexier Miami is than Cleveland.

What we got instead — Nike released the South Beach LeBron 8s just before James' first season in Miami began, and they ended up being the most beloved shoe in his signature lineup. The teal and pink color treatment is quintessentially Miami and was used years before the Miami Heat rolled out their heralded Vice jerseys. It was the perfect introduction for LeBron in Miami, and none of his shoes before or after have generated the same hype.

Even today, when basketball sneakers have gone out of favor, the South Beach LeBron 8 sells for around $800 on the resale market. But there was a time when you'd have to shell out well over a $1,000 to get a pair. It's hard to imagine anywhere near that reception for the Cleveland-appropriate winter boots, limited run or not.