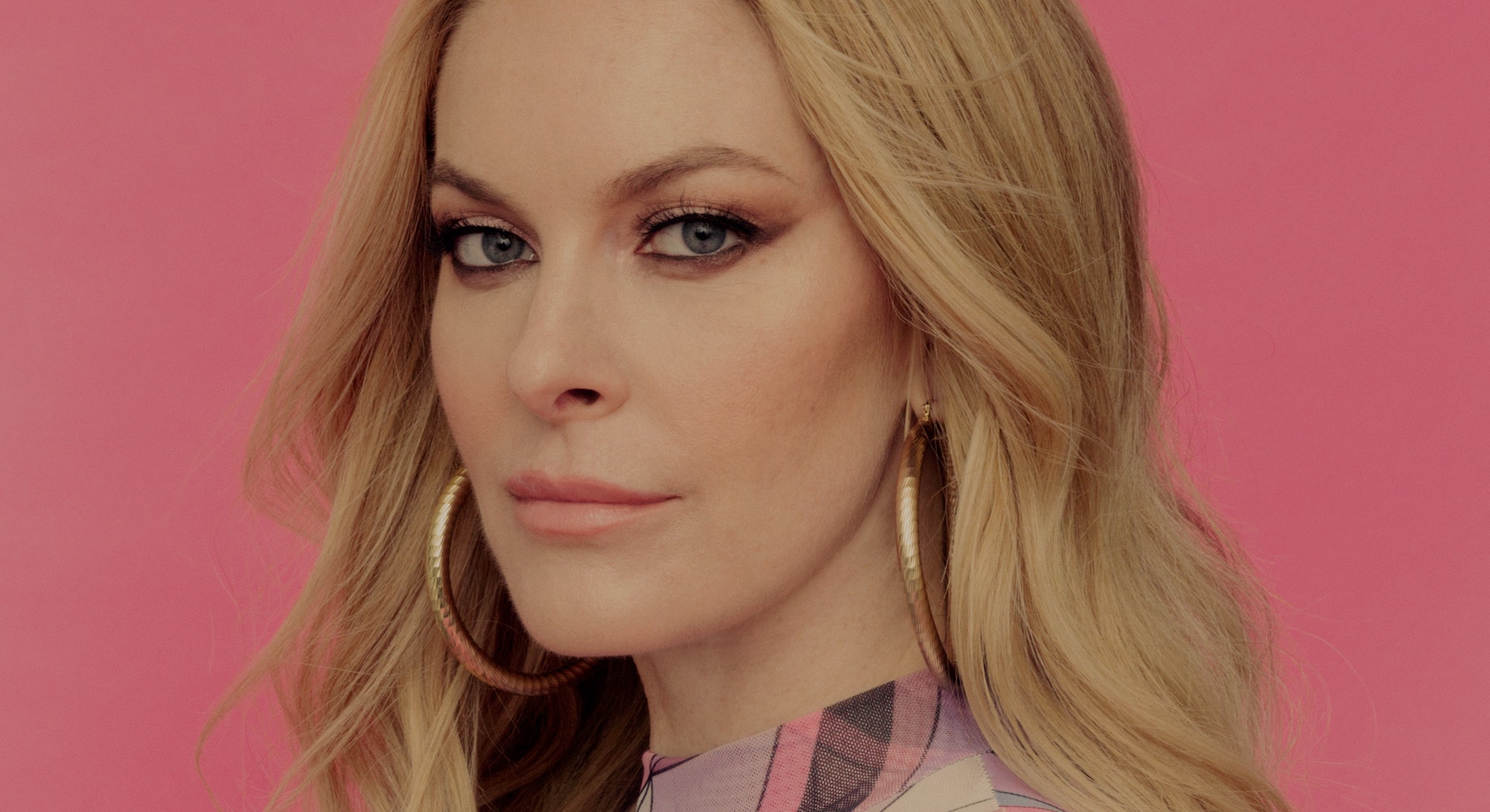 Before she gained a new fanbase as the proudly outspoken downtown “It Girl” on Real Housewives of New York City, Leah McSweeney was one of the most determined women at the forefront of streetwear in the 2000s.

With her brand Married to the Mob, McSweeney took bold swings at the glass storefront panes that so often divide the streetwear world along gendered lines. Unafraid of being saddled with labels like “bossy” or “bitchy” — words too often used to hold back strong women in business — her brand’s cult graphic tees are adorned with unabashedly sassy catchphrases: “My girls rock Balenciaga and smoke mad marijuana,” “Don’t be scared to be a bitch,” “Don’t talk about my mental health or my vagina,” and the infamous “Supreme Bitch” design spoofing the Supreme Logo.

First as an individual finding her own style and later as a tastemaker, McSweeney was always drawn to the T-shirt, which as a fashion object offers a unique marriage of form and function. “The T-shirt is a canvas that you’re wearing,” she tells Input. “It’s almost eye level. After you look someone in the eye, you look down a little, and then there’s their chest. If it’s a shirt with a slogan or a phrase, you really are a walking billboard.”

The direct messaging and bluntness Leah McSweeney has become known for, thanks to her brand as well as her role on Real Housewives of New York, is channeled into her new memoir, Chaos Theory: Finding Meaning in the Madness, One Bad Decision at a Time. True to her image, Chaos Theory resists easy categorization. It is a biography, but it’s also a personal chronicle of 21st-century fashion and streetwear, and even something of a spiritual guide. While not quite self-help, the book takes a more essayistic turn in its later chapters and offers insightful suggestions for approaching the world. McSweeney reflects more broadly on her own journey in faith and conversion to Judaism, as well as sexuality, sobriety, and social media.

“I wanted this to be self-reflective — not just a bunch of war stories about a drug addict in the ‘90s and 2000s.”

Much like a T-shirt you can make work for any occasion, McSweeney wanted her book to not just be engaging or entertaining, but purposeful. “There’s a lot from my life I didn’t put in the book,” she says, “Because I wanted this to be self-reflective — not just a bunch of war stories about a drug addict in the 90s and 2000s.”

For McSweeney, the process of writing a memoir was not just about recalling past experiences, but genuinely reflecting on what it means to share yourself with the world. Despite her radical honesty, McSweeney doesn’t want to take up too much of the limelight. To keep herself in check, she regularly questions her own intentions as a public figure as much as she challenges others. “When you’re talking publicly about something like mental health, you have to ask yourself, are you looking for sympathy? Are you looking for attention? I have to make sure my intentions are good, because I want what I share to be helpful to people.” Whether her words are on a T-shirt, in a memoir, or on social media, there’s always a search for function, the kind of utilitarianism reflected by streetwear itself.

In one of the earliest profiles of her career, a 2007 interview with New York Observer that dubbed her “Queen Tee,” McSweeney summed up her brand’s mission statement, which embodies her emotional and creative philosophies: “I think girls are always taught throughout life to act a certain way and please other people, and I think you should be pleasing yourself. Married to the Mob is more about that than the clothing. It’s more a way for me to say what I feel.”

“Not many Americans can say they’ve had the windows at Colette [Paris].”

Although pressures and expectations grew alongside McSweeney’s business, even more so when she joined Real Housewives, speaking her own truth has always been at the core. “Once I got investors in 2008, I couldn’t be as authentic to myself, because I had people’s money involved,” she says. “Obviously, when you have a bottom line to hit, you’re doing things that maybe aren’t all authentic, but the brand was born out of a very blunt personality.”

Publicist, author, and fellow “Bravolebrity” Kelly Cutrone is one of Leah’s close friends and confidants, and the bond between the two was immediate. “You know the saying, ‘you had me at hello?’ She had me at hell,” Kelly tells Input with a laugh. “We’re both mothers, we’re both in the fashion business, and we both have big mouths and big hearts.”

Cutrone has been a powerhouse of New York Fashion Week for years, representing and producing runway shows for designers like Jeremy Scott and Patricia Field, so even before she knew Leah personally, she was aware of Married to the Mob and its worldwide following. “Go up and down 7th Avenue and ask every designer if they’ve had the windows at Colette in Paris, which usually showcases European and Japanese designers, and it will be a lonely week. Not many Americans can say they’ve had the windows at Colette, but Leah can, and she’s got celebrities like Lil’ Kim and Rihanna choosing to wear her brand too.”

When asked why so many influential tastemakers and brands have lined up to collaborate with Married to the Mob, Cutrone credits it not just to McSweeney’s “underappreciated genius,” but the fact that she’s able to balance the passionate and casual sides of herself. “Leah is someone you would always want on your kickball team in school. She has that ‘I will cut you’ side to her, but she’s actually really easy to work with and not a troublemaker. She’s a lover, not a fighter.”

While sifting through the memories as she wrote Chaos Theory, McSweeney inevitably had to examine her own evolving relationship with style. Her memoir is the story of a woman finding her voice through fashion, both on a professional level and as a means of personal rebellion and self-expression. McSweeney regales us with stories about dress code violations during her school years and reflects on the influence of defiant icons like Lil’ Kim and Chloë Sevigny.

These days, McSweeney is more removed from the pulse, still fascinated by fashion but not quite defined by it. Her current perspective on the industry is shaped by being the mother of a teenage daughter. “Having a 15-year-old who is really into fashion, I’m, like, stealing her Bape hoodies to wear,” she says. “I mean, I paid for it anyway! I’m not as excited about clothing as her because I have other shit I have to think about now, but I remember how excited I was to express myself through fashion. It’s beautiful to watch her learn about who she is through her sense of style, and how she puts outfits together in her shopping, going to vintage stores in the Bronx and Long Island City. I love it.”

As nostalgia for early 2000s styles has exploded, many of those new trends embraced by her daughter are trends that McSweeney also grew up with — or maybe even shaped and influenced herself. “It’s interesting, because my daughter only buys used and vintage Y2K stuff like True Religion jeans, and I’m like what? All these young cool kids are wearing True Religion? I wish I was cool enough to make True Religion look good, but I can’t, because I’m not 16,” she says. “Even though sometimes I wish I was 16.”

“I don’t just want streetwear for this little group of people, I love that it’s big and accessible and mainstream.”

Of course, there are some fashions once again en vogue that McSweeney can’t help but roll her eyes at a little bit. “Von Dutch hats coming back, definitely weird. But I can’t lie, my daughter bought these two hats, a black and a pink one with diamond and crystal encrusted crosses, and the whole visor of the hat is blinged out. I’m like, these are so weird and cool and ugly, and I wear them all the time.”

For McSweeney, the longevity and staying power of streetwear styles is a credit to the culture, which she’s seen firsthand go from the sidewalk to the runway, from niche to industry. “It’s a testament to how powerful streetwear is, the fact that there’s bootleggers, the fact that Supreme is a billion-dollar company, the fact that Virgil Abloh was hired as the head of Louis Vuitton, rest in peace. I don’t just want streetwear for this little group of people, I love that it’s big and accessible and mainstream. I think it’s fucking cool.”