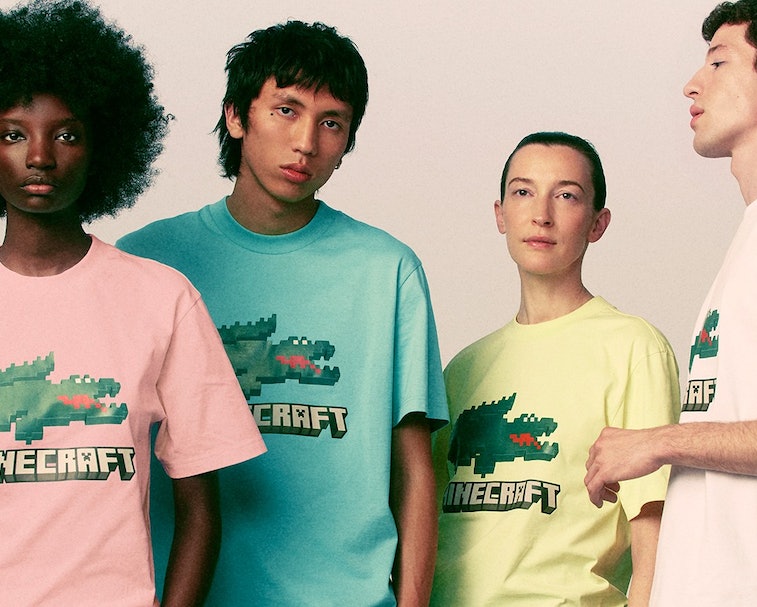 Fashion’s embrace of gaming looks to be continuing as Lacoste and Minecraft join forces on a collaboration encompassing both worlds.

The new partners revealed their collection this weekend in Paris via livestream, with pro gamers Atomicmari and Shubble on-hand to showcase the new apparel. Spearheading the graphic-focused capsule is Lacoste’s famous crocodile rendered in Minecraft’s blocky form (but not to be confused with the alligators that appear in-game). The reptile appears prominently on pastel T-shirts, hoodies, and an excellent all-over print polo — but also recedes to the background on more 8-bit-centric items.

Black-and-white hoodies, long- and short-sleeve tees, shorts, and leggings are more tech-y than prep and emphasize the communal spirit of Minecraft through text. Messages include "crafting together" and "we welcome everyone," while “1927” and “2009” call out the birth years of both parties involved.

Visit Lacoste’s island — Releasing alongside the merch is Croco Island, a Lacoste-inspired map that’ll be available to download for free across the globe. A giant crocodile appears at the center of the lush landscape, with a healthy amount of tennis courts calling back to the French brand’s sporting routes.

Lacoste is hardly the first force in fashion to get involved in gaming, as Louis Vuitton, Balenciaga, and Gucci have already made efforts to appeal to a young demographic growing into high-end purchases. The League of Legends championship trophy now lives in a Louis Vuitton trunk similar to the NBA’s, while Balenciaga has aligned itself with Fortnite for digital and physical apparel. Gucci, meanwhile, has gone a less game-specific route with recent releases including an extremely limited Xbox Series X and a luxurious backpack made in collaboration with 100 Thieves.

Lacoste’s Minecraft collaboration should come in significantly cheaper and represent a nice middle ground between the merch you’d find at your local GameStop and the luxury goods you’ll likely never be able to afford. The merch is considered enough to draw enthusiasm, and you can look for it to drop at 7 p.m. Tuesday, March 15, through Lacoste’s website.