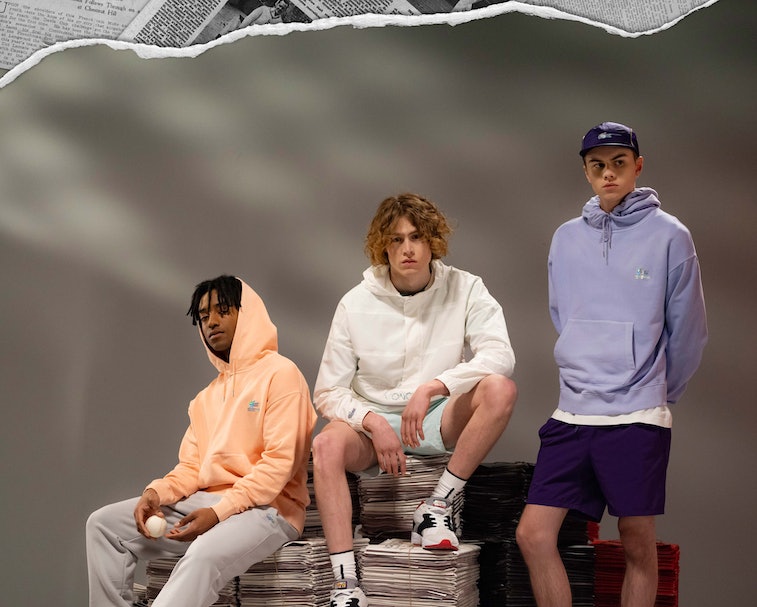 Concepts, the Boston-based sneaker and streetwear boutique, has partnered with Lacoste on a collection inspired by tennis and fit for Martha's Vineyard.

That may sound stuffy, but the range of pastels is anything but. Sweats, tracksuits, and a wider range of apparel hew the line between prep and streetwear with timeless silhouettes. The collection — due to release this Friday, August 14 — also includes a reintroduction of the Storm 96 sneaker, which itself was inspired by Lacoste's first sneaker from 1923. Only 500 pairs of the 24-year-old sneaker will go on sale in the United States.

Lacoste's lesser-known Boston connection — René Lacoste, the professional tennis player and founder of the namesake brand, was first given the nickname "Alligator" by a writer for the Boston Evening Transcript in reference to the reptile stitched on Lacoste's shirt. This motif would later become the logo when Lacoste launched his brand.

Together, Concepts and Lacoste honed in on the Massachusetts destinations Martha's Vineyard and Cape Cod for the color palette of their collection. Soft purple, green, blue, and orange feature throughout a range of windbreakers, hoodies, track pants, shorts, polos, and T-shirts all adorned with an iridescent Lacoste logo. The collection also includes a pair of slides in black and red, as well as a camp hat in a variety of colors.

While crunchy outdoor gear is dominating the summer, Concepts and Lacoste offer a more classic aesthetic for the last days of the season.

The kicks — Lacoste's Storm 96, first launched in 1996, is done up in neutral tones with cream, black, white, and grey. A dash of color comes in the red outsole and gold-tipped laces, while the iridescent Lacoste logo carries over to the kicks. Each pair will come with a set of patches to represent Concepts' four stores worldwide, and they can be stashed in a pouch hidden inside the tongue. Alternatively, leave the patches at home and use the pouch for... whatever it is you want to hide.

Many bridges to Boston — The collection will release this Friday through Concepts' and Lacoste's webstores, as well as Concepts' four worldwide locations. 550 pairs of the sneakers will release in the U.S., with another 100 available for the rest of the world. And if you're left with a score of love for the sneakers, there's plenty of apparel to go around.