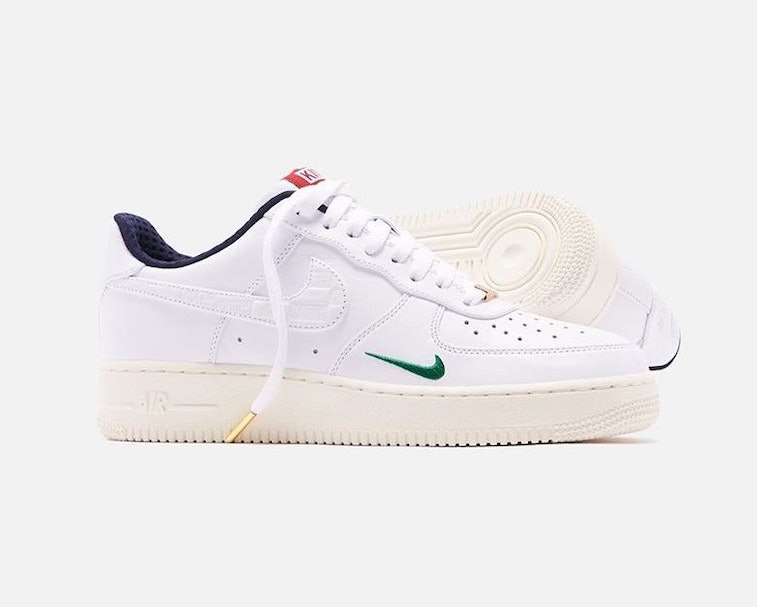 As harsh as I've been on KITH, the brand's footwear is often much better than its clothes. I own the OG Salmon Toe Asics, as well as the Response TR Boosts and Agravics from their 2018 collaboration with Adidas. And there are plenty of other KITH sneakers that I admit are good. These "friends and family" Air Force 1s, though. These are not among them.

KITH is raffling off five pairs of the sneakers that were never intended for a public release. I would say KITH should have kept it that way and spared us, but the change of heart is inspired by a good cause. All proceeds from the raffle will be donated to Direct Relief, the same organization working to help those impacted by COVID-19 that Noah has previously raised money for.

Perhaps you like them — I won't roast you if you like these and purchase a raffle ticket whenever KITH opens it up today. You're doing a good deed, even if partially motivated by the pursuit of jawnz.

But god, these are so bad. The unsightly KITH logo adorning it not once, but over and over in a tile pattern on the Swoosh and insole. The gaudy gold accents. The ability to have an overload of colors on a shoe that's predominantly white. The only endearing detail is the tiny green Swoosh, but it's overwhelmed by the crowded field that is this shoe. I never thought I'd see an AF1 with a cream sole that's this tasteless.

Donated by employees — Ronnie Fieg says the five pairs were donated by employees, which is... weird. Why put the onus of a charity initiative on your employees instead of, you know, the company? Kudos to them for donating, but I'd be a little miffed that the brand itself isn't doing more. It's not quite as bad as Whole Foods asking its employees to "donate" their paid time off for those who've gotten sick, but it still stinks. If KITH had produced goods specifically for this initiative, it still could have recouped production costs without anyone blinking an eye.

If all this isn't a turn-off, head to KITH's website before the 6 p.m. EST cutoff Friday night to enter the raffle.