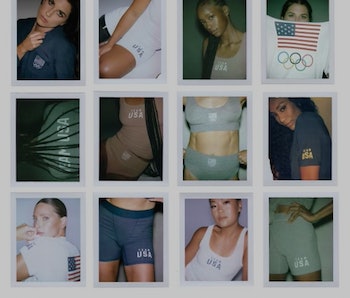 Kim Kardashian’s Skims line is officially worthy of a gold medal. The star shared on social media that her brand would be providing Team USA’s official undergarments, pajamas, and loungewear for the 2021 Tokyo Olympics, as well as for the Paralympics. In total, 626 female athletes will receive the patriotic Skims collection.

Kardashian’s announcement follows the news that it-bag designer Telfar Clemens would sponsor and design the uniforms for Team Liberia. Most would agree that the two moguls, however, are on entirely different design levels — though there’s nothing more American than having a reality television star outfit the country’s Olympic team. And to clarify, Kardashian will only provide Team USA’s underwear — an Olympic first — while the team’s actual uniform will be designed by Ralph Lauren, as they have been since 2008.

United Skims of America — In a lengthy post announcing the Olympic Skims, Kardashian wrote about learning of the sports trials from Caitlyn Jenner, and admiring athletes’ dedication and honor. She also revealed that Olympic officials reached out to her — not the other way around — to invite Skims as part of the American team. “When I received the call inviting Skims to be a part of @TeamUSA, every moment I’ve spent admiring the strength and energy of the Olympians from the sidelines came full circle,” Kardasian wrote in her Instagram post.

Skims goes worldwide — Kardashian’s Skims line has seen its fair share of hate, mainly thanks to the star’s “tone-deaf” promotion antics. Just a few weeks ago, Kim advertised Skims’ new Cozy fabric by wrapping a $200K Lamborghini Urus in matching fluffy white material, covering everything from the license plate to the rims. “I can’t wait till a bird shits on this,” one critic commented on her post.

Kim’s Olympic Skims, on the other hand, will cement Skims’ place in American history. We can laugh at the absurdity of it all — but at the end of the day, we’re pledging allegiance to the United States of Kardashian.