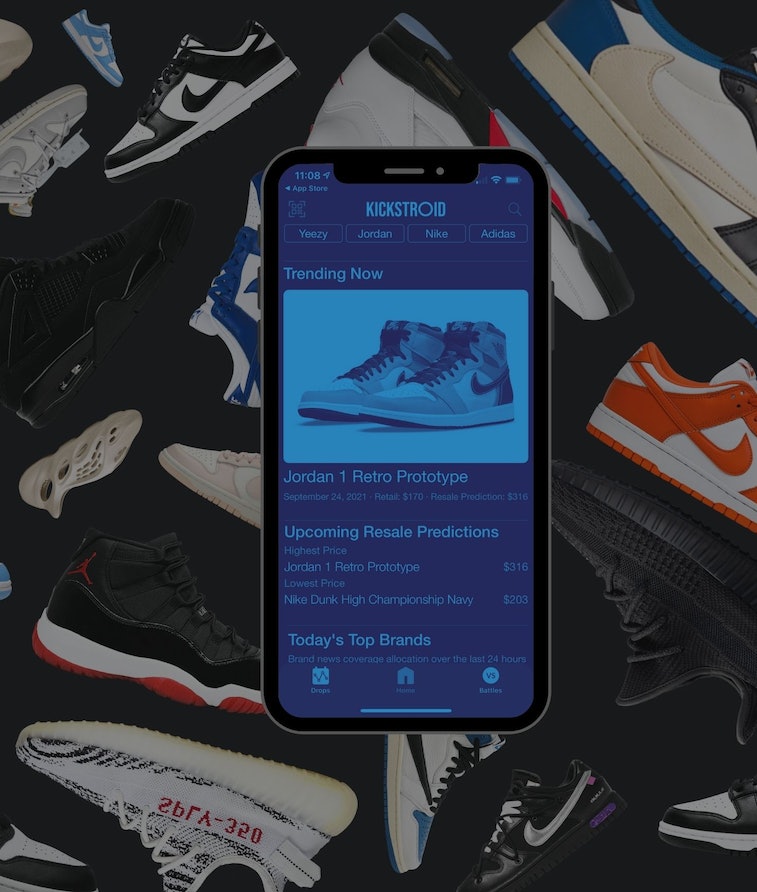 Is it a collection of Off-White and Yeezy; a love for customized Air Force 1s; or a single pair of beat-up Jordans?

For David Alston and Nicco Adams, the answer is all of the above. The vast range of sneakers — and the people who love them — is why they created their app Kickstroid, which makes sneakers “for everyone,” they told Input in an interview. “Being a sneakerhead doesn’t mean you’re just going after the Travis Scott [shoes],” Alston says. “It's the love of sneakers entirely…. You just have to be part of the culture in a way you feel comfortable.”

No matter which (or how many) pairs you own, Kickstroid helps sneakerheads connect with the culture. Within the app, users can read curated news from across the sneaker community, stay updated on upcoming drops, and vote who has the best shoes through sneaker battles. Advertised as the “smartest sneaker app ever,” Kickstroid also utilizes machine learning to identify sneakers by their brand and model, estimate a shoe’s resale value, and build a “For You” preference profile that allows users to discover new sneakers — hyped or not.

“People were lacking insight and approach [to the sneaker community]. They’re Ryan Reynolds, but without the Free Guy glasses.”

Adams explains that he and Alston met while studying at the University of Illinois at Urbana‑Champaign. “We met through a mutual friend and kept seeing each other on campus,” he says, noting that each time they linked they checked out each other’s sneakers. Adams, who claims he’s been a shoe enthusiast since he was around 12, says his knowledge of sneaker culture paired well with Alston’s technical skills and passion for sneakers. Together, they decided to make an app “by the culture, for the culture,” Alston says.

Donald Glover’s 2019 partnership with Adidas was one of the inspirations behind Kickstroid, Alston notes. Both he and Adams are Childish Gambino fans, and witnessing the artist’s fanbase tune into the sneaker world made the duo realize that “so many people are sneakerheads and just don’t know it yet,” Alston says. Referencing the movie Free Guy, in which Ryan Reynolds’ character discovers his life is a video game once he dons a pair of sunglasses, Alston adds: “People were lacking insight and approach [to the sneaker community]. They’re Ryan Reynolds, but without the Free Guy glasses.”

Kickstroid offers a better view to the sneaker community: “We’re calling Kickstroid the ultimate tool for sneakerheads,” says Alston. “It uses AI to come up with price prediction [on the resale market], metrics on the culture, and sneaker battles, which together help people understand and see the sneaker community in a completely new way.” The app helps fellow enthusiasts get accustomed to the culture, bond over kicks, and learn more about what kind of shoes they like. Especially with the pandemic restricting social interactions to social media and other online platforms, there’s a longing for community that hasn’t been satisfied.

“Right now, being a sneakerhead feels like it’s all about access,” Alston says, citing the hoops consumers have to jump through — and know about in the first place — to score a pair of shoes. With lottery-based draws, bots, delivery issues, and insane prices on the resale market restricting sneaker access, it’s easy for enthusiasts to feel isolated; but “that should never keep someone from feeling like they aren’t a sneakerhead,” Alston maintains. The sneaker community is better off “democratizing” the definition of what a sneakerhead is, he adds, making the space more inclusive and welcoming for all.

“Nicco and I first bonded over Telfar,” Alston recalls, although neither of them owned any of the brand’s products. Rather, the label’s messaging — it’s not for you, it’s for everyone — sparked a conversation between the two. “Sneaker culture is so rooted in Black culture and Black vision,” says Alston, pointing to faces like Kanye West and Virgil Abloh. “Yet a lot of people on the technical side [of the sneaker industry] don’t look like us.”

“It’s important to give back and keep helping others.”

The duo brought the app to Apple’s inaugural Entrepreneur Camp for Black Founders and Developers in early 2021, which they describe as a transformative experience. “Pretty much all of our machine learning stems from Apple,” says Alston. “They took us from fighting with sticks to fighting with Excalibur.”

Apple’s camp connected Alston and Adams with business mentors and experts in tech, both of which “brought [Kickstroid] to the next level,” Adams says. But meeting fellow Black entrepreneurs in the program was “a blessing,” Alston adds. “One of the toughest things about being an entrepreneur in tech is finding a support network of people who look like us,” he says. There’s a level of understanding between the Black entrepreneurs as they delve into a primarily white tech industry.

On Kickstroid, you can check the resale value of shoes, upload your own sneakers to compete in a sneaker battle, and see what kicks are hot at the moment.

With Kickstroid, Alston says he and Adams want to make sure the kindness and generosity that was shown to them doesn’t stop with them. “Part of access is knowledge,” he adds, saying that anything the duo learns is passed around with their community of Black entrepreneurs. “We’ve had opportunities that not many people who look like us get to have,” says Adams. “It’s important to give back and keep helping others.”

Alston and Adams are making both tech and sneaker spaces more accessible, lending knowledge where it’s needed. While they set out with hopes of creating the smartest sneaker app ever, they ended up with a community — which is really what the sneaker space is all about. The culture wouldn’t be what it is today without the people who actually wear and love shoes, and Kickstroid is bringing them together.