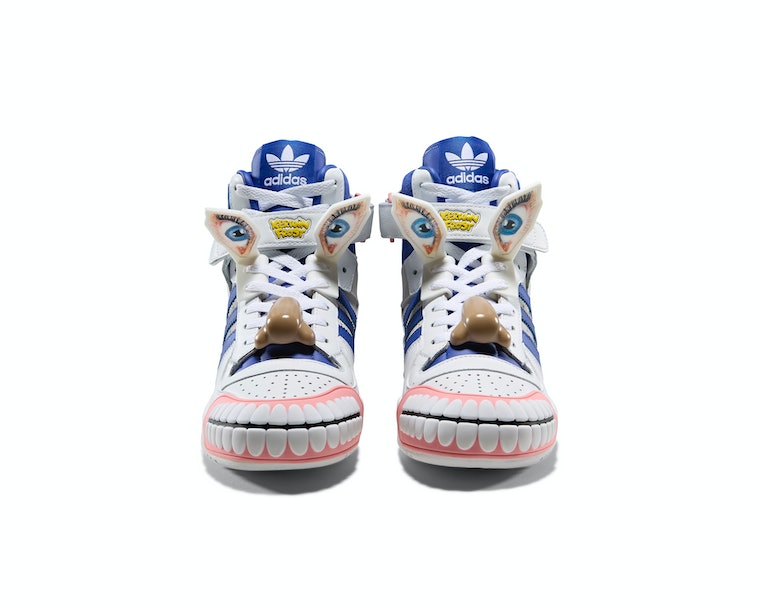 Kerwin Frost and Adidas immediately made a splash when they unveiled the entertainer’s take on the Forum Hi. Footwear became an avenue for comedy as Frost transformed the sneaker into an Animorph that looks like it became stuck in between phases. The part horse, part person, and fully bizarre sneaker proved polarizing among ‘heads but undoubtedly succeeded as an attention-grabber regardless of who’s actually serious about pressing “purchase.”

Nearly a month after Frost’s Forum High first shocked and awed, Adidas has now planted its release on the calendar. The eerily detailed face shoe will release November 17 as part of a larger collection, and the final images seem to do away with any connection to horses.

Gone is the patch of hair hanging off the sneaker’s heel, furling onto the ground, and seeming to invoke a horse’s tail. What's left is a pair of photo-accurate blue human eyes protruding from the top of the eyelets and a big brown nose serving double duty as a lace dubrae. An absolutely massive, teeth-revealing mouth then wraps around the toes — and starring the sneaker down from the front proves to be a perturbing experience.

Let your freak flag fly — Wearing Frost’s face-shaped Forum High is sure to garner strange looks from onlookers, but it also wouldn’t be a stretch to look at the sneaker as a piece of art. As much as we want to encourage people to wear their shoes, you’d be justified in placing this beautiful monstrosity on a shelf as the most funny decoration in your crib.

After first revealing his latest Adidas collab, Frost took to Instagram to explain just what he was thinking in creating such a bizarre sneaker. "My intention with my Adidas collection is to create art pieces that push the needle and break boundaries," he wrote on a story. "This is me fully to the bone and I am so proud of what I created and thankful to Adidas for letting me make what I wanted to make. When I announced my collab you probably expected a colorway play — I literally changed the genetics of iconic silhouttes. I love the polarizing reaction, and I'm glad to see people like WTF!"

If that feeling of “WTF!” implores you to purchase the shoe, you’ll be able to do so November 17 through Adidas’ Confirmed app and select retailers. And if you’re looking for something a tad less arousing from the mind of Frost, he’ll also release a multi-colored Forum Low with cartoonish animals appearing on a semi-translucent patch, as well apparel featuring even more characters.