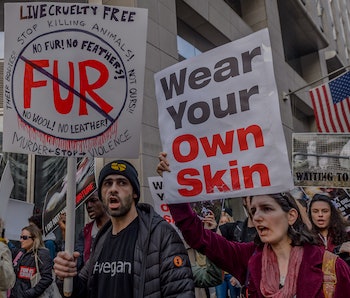 Kering, the second-largest luxury fashion conglomerate in the world, has announced a ban against fur across all of its brands. The move comes four years after Gucci, just one of Kering’s brands, announced it would go fur-free and declared the material “not modern.”

Balenciaga, Bottega Veneta, and Alexander McQueen had previously decided on their own to move on from fur, which leaves Yves Saint Laurent and Brioni as Kering’s last brands to be affected by the mandate, which will go into effect for the Fall 2022 season. Elsewhere in the industry, Prada, Versace, Burberry, and Chanel have all ceased using the material and a trend toward sustainability and away from cruelty.

Kering chairman and CEO François-Henri Pinault told Business of Fashion fur “is symbolic; it’s a material that was very much linked to the luxury industry historically.” Pointing towards an increased emphasis on ethical and environmental responsibility, Pinault said, “Some materials have no place in luxury.”

Kering’s animal welfare standards — In 2019, Kering announced a new set of policies in order to “verify the humane treatment of animals across the Group's supply chains.” Among the standards are “detailed requirements for the treatment of cattle, calves, sheep, and goats throughout their entire lives, as well as guidelines for [slaughter houses].” Going forward after the fur ban, those policies will continue to be applied to any “animal fibers and materials.”

Looking specifically at mink fur production, a 2011 study published by environmental research agency CE Delft found that the impact of 1kg of fur is at least five times higher than that of wool. While a large amount of energy is consumed throughout the entire process of production, the largest comes from the amount of feed required as minks are raised.

“Young consumers and young millennials also expect now that companies pay attention to these values,” Kering sustainability chief Marie-Claire Daveu told BoF. “Look at what happened this summer; how can you say I don’t care? And if you have the power, how can you say it’s terrible, but I won’t act?”