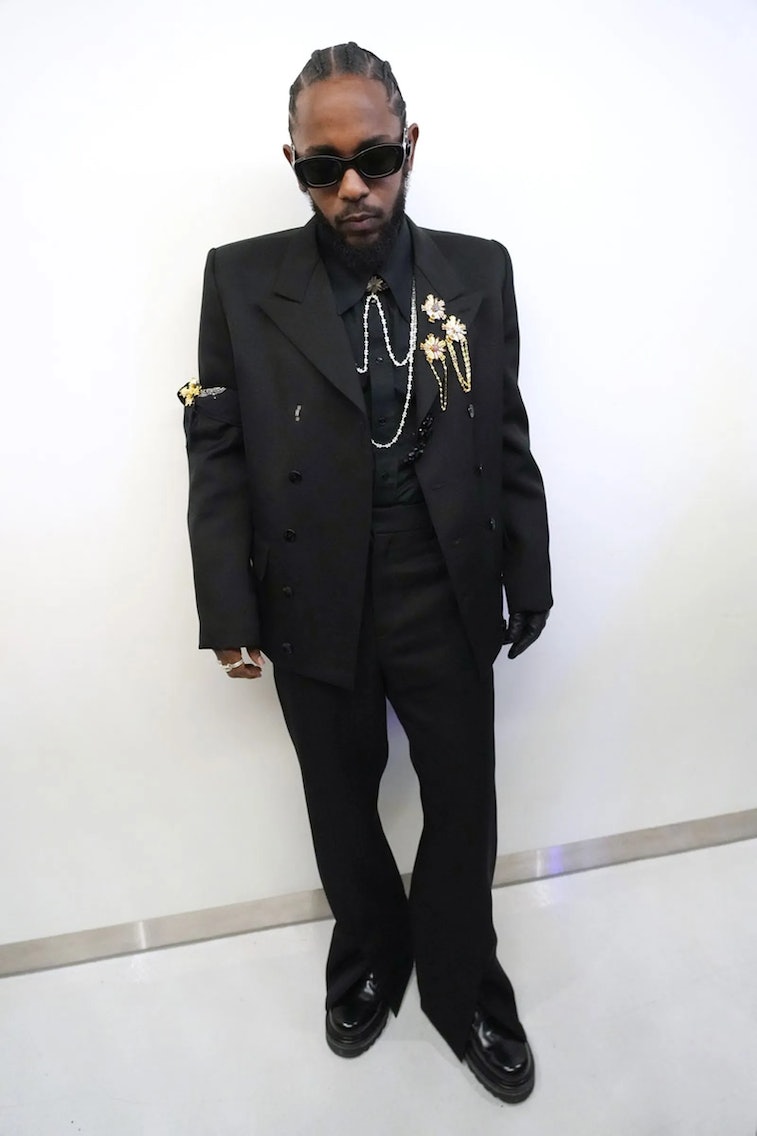 The Super Bowl halftime show always promises an array of show-stopping looks, and this year’s performance was no exception: Mary J. Blige showed out in a sequined set; Snoop Dogg decked himself out in paisley; Dr. Dre kept it simple in a leather bomber; 50 Cent channeled his “In Da Club” music video in a white tank and matching sweatband; and Eminem debuted a pair of Air Jordan 3s bearing a “Slim Shady” name tag. Fellow performer Kendrick Lamar may have had the most powerful fit of the night, however, donning a custom Louis Vuitton look from Virgil Abloh’s final Fall 2022 menswear collection.

For his heartfelt tribute, Lamar paired a black wool double-breasted suit — complete with diamond necklaces, earrings, and jewelry buttons from Tiffany and Co. — with a silk shirt, both pieces which debuted last month in Paris. The blazer boasted Abloh’s signature power shoulders, a feature the designer explored more in his final few shows at Louis Vuitton, as matching tailored trousers split at the ankle to create a gentle flare.

Lamar accessorized with black leather gloves and black leather boots from the fashion house, covering himself fully in the Abloh-created look. Dancers surrounded Lamar during his performances of “m.A.A.d city” and “Alright” on the stadium floor, wearing similar black suits — albeit non-designer versions — alongside green and white “Dre Day” sashes.

Making posthumous history — Abloh, who passed away last November, worked as the head of his label Off-White and artistic director of Louis Vuitton’s menswear. The designer was a leader in contemporary visual culture, luxury branding, and streetwear, with his designs welcoming more rappers, bootleggers, and young creatives into high-fashion spaces. His last LV collection, which debuted in January, was described as a consolidation of the “themes and messages of the eight-season arc Virgil Abloh created for Louis Vuitton.”

Lamar’s tribute to Abloh isn’t his first: The rapper has referenced Louis Vuitton in several of his songs, including “A Little Appalled” and “Money Trees.” Still, there are meaningful parallels between this year’s halftime show and Abloh’s legacy. Just as the designer used his platform to uplift people outcast from the fashion world, Lamar — alongside Blige, Snoop Dogg, Dr. Dre, 50 Cent, and Eminem — put on a performance like no other, focusing on rap and its massive impact on American culture in the midst of several racially fraught years for both the country and the NFL.

As ridiculous as it sounds, showcasing rap at the Super Bowl seems to be a radical act in America — let’s not forget that in 2020, over 1,300 complaints were sent to the FCC because of J.Lo and Shakira’s act, which featured belly dancing, twerking, and reggaeton bars. Yet rap — especially some of the songs performed this year — is ingrained in the American experience, most notably referencing West Coast culture and what it’s like being Black in America.

Similarly, Abloh’s work brought streetwear to the forefront of high fashion, encouraging and elevating Black creatives with his “you can do it, too” mentality. He entertained a more inclusive world despite working in the most exclusive of fashion spaces, a sentiment that seemed to be reflected in Lamar’s Louis Vuitton suit as the rapper made Super Bowl history. It only made sense for Abloh, and his all-encompassing legacy, to be a part of the act.