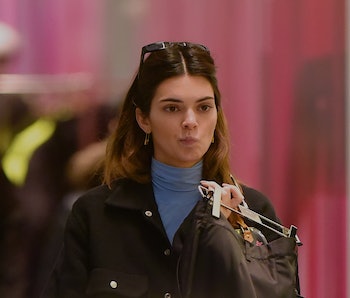 Crocs, a once-polarizing fashion statement, are now the world’s hottest slippers thanks to collaborations with the likes of Balenciaga, Justin Bieber, and Bad Bunny. Last week, the company reported record revenue of $641 million, a whopping 93 percent increase in comparison to 2020.

The rubber slippers are no longer just for chefs and healthcare workers — even Nicki Minaj has shown off a pair of Crocs, prompting a 4,900 percent spike in demand, according to Google trends. Celebrity influence, like with most products, has practically raised Crocs to a level comparable to Kanye West’s Yeezy.

It just so happens that Kendall Jenner, a notable Yeezy slide fan, has switched out her Adidas slippers for a pair of camouflage Crocs; fellow model Ashley Graham opted for the same camo Crocs to add to the hype. Together, their influence boosted demand for camouflage Crocs by 600 percent in just a matter of hours, The Sole Supplier shared with Input. The military-inspired slippers may be the next new trend.

A controversial style — Jenner, who styled Crocs’ Classic Realtree Edge Clogs with socks and sweatpants, teases camouflage as the next “ironic workwear” trend, which sees people styling traditional workwear — or in this case, hunting gear — as fashion-forward pieces. Camouflage fits in with other trending items like trucker hats, wife beaters, and hiking boot sneakers: Items rarely seen on models like Jenner or Graham, who presumably don’t hunt and hire services for any blue-collar work.

Just like Crocs themselves, such styles are meant to be polarizing. Wearing camouflage especially sparks controversy thanks to the print’s ties to the military and hunting — some veterans even call the trend “stolen valor” — and now camo has been associated with Trump supporters and white supremacy.

During an impeachment trial of former President Trump, Rep. Jamie Raskin, (D-Maryland) described Trump’s supporters as wearing “Confederate battle flags, MAGA hats, weapons, and camo army gear.” Robert Sanders, a retired U.S. Navy judge and a national security professor at the University of New Haven, said rioters at the January 6 attack on the Capitol wore camouflage as a way “to say they are warriors for the white race.”

We doubt Jenner and Graham had such sinister messaging in mind when they innocently slipped their Crocs on — but like Trump’s red baseball hat, has camo print become synonymous with hate?

Leave Crocs alone — Last year, the Proud Boys tried to make a Fred Perry polo part of their uniform, which quickly led to the brand discontinuing the top. The affair, while momentarily ruffling fashion feathers, didn’t taint Fred Perry’s overall reputation — and the same can be said of Trump supporter’s adoption of camouflage.

Over the decades, so many types of people have worn camouflage: In the ’70s, people wore the print as an act of protest, while designer Jeremy Scott utilized the military pattern as part of his pre-fall 2020 Moschino collection. Another group of people wearing camo — no matter how hateful — won’t change the overarching meaning of the pattern.

Since Jenner and Graham wore their camouflage Crocs, searches for the print have seen a 104 percent increase, The Sole Supplier shared with Input. It’s clear shoppers are motivated to buy the clog thanks to celebrity influence — and aren’t concerned by other, malevolent messages.