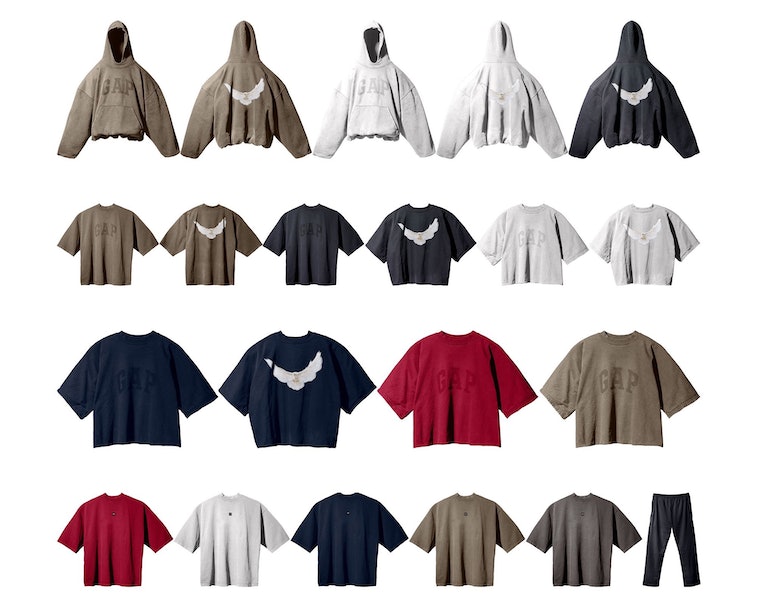 It’s a big day for Ye. Aligning with the Donda 2 album release and its listening party in Miami today, Yeezy Gap is finally gearing up to present its anticipated collection with Balenciaga.

Though Yeezy Gap has tested the waters with an inch-by-inch drop of shapeless round jackets and plain hoodies, Balenciaga’s grand entrance is adding layers to the partnership. The capsule is reportedly dropping today, but there’s still no telling when the official release will be, since the brands keep adding time to the Gap website’s countdown.

Loungewear is king — While this latest iteration was met with anticipation and intrigue, the designs are exactly what was promised: an array of styles representative of Yeezy’s utilitarianism, Gap’s minimalism, and Balenciaga’s luxury. Set on a variety of hoodies, T-shirts, and pants, the drop is fixated on Yeezy’s signature oversized DNA and minimal “Gap” logos. Each style comes in neutral colors, including black, brown, gray, red, and white, with most of the tops’ backsides sporting a graphic of a dove in flight.

Interestingly, the brands opted for a cropped fit of hoodies and T-shirts, much to the chagrin of fans; one Twitter user said the collection “looks like stuff you’d mow your lawn in.” But actually, it’s a nice break from the miles of fabric typically used in common streetwear silhouettes.

All this for a T-shirt? — Though the three-way partnership was meant to be “available to everyone at all times,” that couldn’t be more untrue. Yeezy Gap’s hoodies and round jackets are reselling for up to $200 a pop, and adding the Balenciaga cosign can’t possibly make the collection more accessible for the common buyer.

The Yeezy Gap Engineered by Balenciaga collection has already been delayed three times since this morning. To make matters more confusing, the website, which seemed sure of its final afternoon release on the Yeezy Gap site, has taken down the countdown altogether at the time of this writing. Fans are on the edge of their seats, but it seems the brands are more than happy to keep them waiting and waiting.