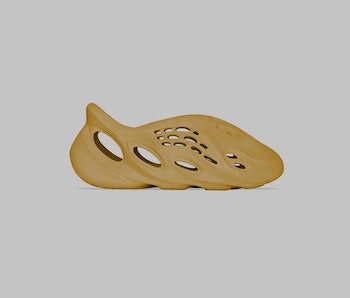 Yeezy has kept its fans satiated with plenty of recent drops, and it seems more releases are headed our way this summer. According to Yeezy Mafia, a muted golden iteration of the peculiar Foam Runner clog is set to drop in July, alongside the previously previewed “Mineral Blue” and “Red October” pairs. The newest model is dubbed “Ochre” as its color draws inspiration from the natural clay pigment it’s named for.

While many were quick to judge the bizarre-looking Yeezy Foam Runner — made of a sustainable algae-based foam — the silhouette has quickly garnered a following, with each release not only instantly selling out, but also reselling for up to five times its $80 retail price. And Ye’s upcoming “Red October” pair, which is actually dubbed “Vermillion” because he couldn’t file the rights to the name, will most likely be the most coveted Foam Runner of all. Its all-red makeup pays tribute to the “Red October” color scheme of West’s 2014 Air Yeezy 2, a result of his short-lived stint with Nike. Better pray to Yeezus you can cop a pair.

Mellow yellow — The “Ochre” Foam Runner won’t be any easier to obtain, but you can certainly try. Given the “Vermillion” pair isn’t set to drop until October, and the “Mineral Blue” version is slated for a May release, the golden pair gives consumers a chance to cop right in the middle — Yeezy Mafia has the shoes scheduled for a July launch.

Taking on the same design as its predecessors, the muted yellow shoe opts for a monochromatic look. Featuring the silhouette’s signature oval perforations on the heel and midfoot, with smaller holes near the tip of the shoe, the clog offers itself as the perfect breathable summer sandal.

To keep up with Adidas’ sustainability efforts, the forthcoming Foam Runner — as well as all iterations of the silhouette — is made entirely of EVA foam, some of which is derived from algae. Out of all of Yeezy’s shoe offerings, the Foam Runner is among the most sustainable — and affordable — models.

Sliding into summer — Yeezy Mafia says the “Ochre” Foam Runner should hit the Yeezy site sometime in July, but lookout for an official confirmation from Adidas. You don’t want to miss the drop, or risk being late — most Yeezy pairs, especially the Foam Runner, sell out in mere seconds. And between people looking to flex after quarantine or those who want to stay inside in style, Ye’s upcoming $80 slide offers a simple solution.