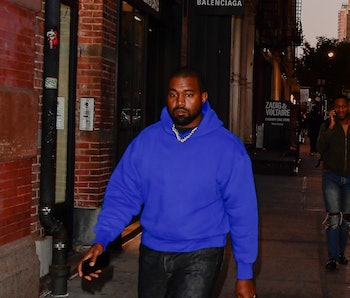 Kanye West’s Yeezy brand has allegedly failed to deliver its products in a timely manner, causing the state of California to serve a legal delivery of its own. The state is suing Yeezy for “failing to ship items within thirty days and failing to provide adequate delay notices” to shoppers, among other allegations, according to a lawsuit filed against the brand on October 22 and reviewed by the Los Angeles Times.

The lawsuit claims that West’s company violated California state business code sections requiring products purchased online to be shipped within 30 days. If the items are not able to be shipped within that time period, merchants are obligated to provide a refund, send out a notice of the delay, or find another remedy — none of which Yeezy has done, the lawsuit claims. Legal documents also allege that the brand “made untrue or misleading statements regarding its ability to ship products within a certain timeframe, particularly where customers paid an additional charge for expedited shipping.”

Moving forward — California’s lawsuit against Yeezy — which includes Yeezy and Yeezy Apparel, sold at both Adidas and Yeezy Supply — was filed by Los Angeles County District Attorney George Gascón, who is working alongside the district attorneys of Alameda, Napa, and Sonoma counties on the case. The lawsuit did not provide an exact date when the alleged violations of the state code began, nor did it specify which Yeezy products were not shipped out.

According to the Los Angeles Times, the attorneys are seeking a resolution that would permanently restrain West’s companies from repeating the alleged practices, as well as fines up to $2,500 for each breach of the state business code; making this lawsuit an expensive settlement for Yeezy depending on how many orders haven’t been sent out. Restitution for affected customers, whether that be product or a refund, is also required from the brand.

Being Yeezy ain’t easy — Kanye, who legally changed his name to Ye earlier this month, has seen massive success with his Yeezy line since it launched in 2013. The brand’s chunky footwear offerings, as well as its newest collaboration with Gap, sell out immediately and resell for thousands of dollars online.

Over the past year, however, Yeezy has become entangled in a web of lawsuits. In April, Walmart contested an impending Yeezy logo, citing the graphic looked too much like the one it has been using on its own goods for over a decade; and only a few months later, Yeezy legally shot back at Walmart after the retail giant allowed bootleg Yeezy Foam Runners to be sold on its platform. “The last thing Yeezy wants to do is associate itself with Walmart,” a statement from the streetwear brand added.

It’s worth nothing that Yeezy’s shipping delays may be caused by global supply chain disruptions, which are affecting brands like Supreme — but the brand should still be informing shoppers on when their products will be arriving. Especially as Ye begins to work his way into high fashion — recently trading out his own Yeezys for Balenciaga Crocs on a lunch date with Anna Wintour — he needs to ensure his business practices are up to standard.