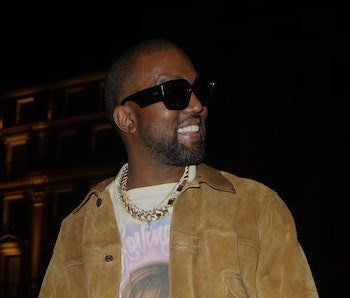 Despite Adidas Yeezy funding his fortune, Kanye West has been spotted rocking a pair of competitor Nike’s Vandal High sneakers. Paired with a full face covering, a bright blue puffer jacket, and an all-black top and bottom, Ye left his own designs at home for the NikeLab exclusive Vandal High “Terminator,” released in 2015 to promote the release of Terminator Genisys.

Kanye has made his love for Nike sneakers obvious before this outing, though — even telling Nick Cannon in an interview that he still wishes he could wear Air Jordans. “In my Adidas contract, [I] definitely should be able to wear Jordans,” West said. “Jordans need to be part of reparations. You can’t tell a Black man not to wear Jordans. It should be in any deal.” Wearing Nike sneakers is definitely not in Ye’s Adidas deal, however, and we doubt the brand appreciates Kanye praising its competitor — no matter how much money Yeezy is bringing in.

Not just any Nike sneaker — Bearing an eye-catching silver Swoosh, Kanye’s Nike kicks aren’t just any sneaker either. They could be considered collectibles, given their limited drop and availability — only two pairs are listed on StockX for the prices of $993 and $15,277. Money is no object to West though, whose Adidas sneaker line has made him a billionaire, and no doubt funded his Nike purchases.

Granted, in the paparazzi photos, the rapper’s Jesus-themed mask covers the entirety of his face, making it hard to identify Yeezus. That could be anyone, West will claim in the next Yeezy board meeting, as Adidas executives roll their eyes and forgive him (again).

Repeat offender — Even prior to dissing Adidas in his Cannon interview, Kanye publicly praised Nike’s futuristic ISPA Road Warrior sneaker in a series of tweets. “WOW SO COOL NIKE … KEEP INNOVATING … THE WOLRD [sic] NEEDS IT … GREAT JOB,” he tweeted along with a photo, presumably of him, holding the sneakers. “THESE BRING ME BACK TO MY CHILDHOOD … GROWING UP ON ANIME … I NEED A PAIR.”

While we have yet to see West publicly don a pair of Road Warriors, seeing him express love for Nike over and over again is surprising — not just because of his breach of Adidas’ contract. After parting ways with the Swoosh in 2013, the rapper described his relationship with the brand as “heartbreaking,” reporting that their breakup came after Nike refused to pay him royalties for his Nike Air Yeezy line. Had the company given Kanye the deal he wanted, the rapper might still be with Nike today, alongside other A-list stars like Drake, Travis Scott, and LeBron James.

How much more can Adidas take? — With all the shit West has pulled, though, it’s a miracle he’s still in business with Adidas. The German brand terminated basketball player Terry Rozier’s deal in 2018 after he wore a pair of Nikes prior to a game, although it’s kept Kanye around despite his repeated number of very public Nike praises.

To be fair, Kanye is a much bigger asset for Adidas than Rozier — but wouldn’t that make his love of Nike more damaging to the brand? Since West signed a multi-year contract with Adidas in 2016, he’s declared and shown his love for Nike multiple times, all while making billions off his Yeezy line. Either the rapper is making Adidas too much money for it to care about his deal breaches, or we’ll be seeing a disruption of the Yeezy brand fairly soon.