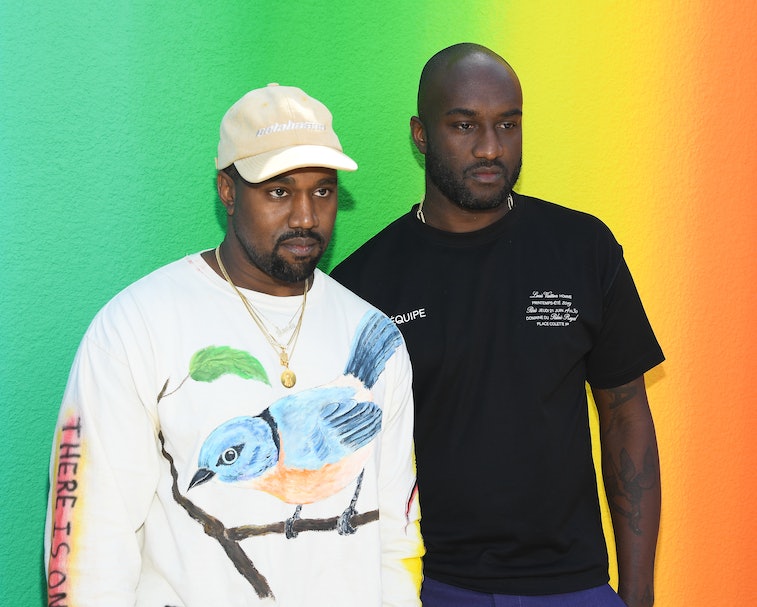 British tabloid The Sun has suggested Kanye West is already being tapped to replace Virgil Abloh at Louis Vuitton, less than two weeks after the news of the late designer’s death. “[Kanye] is being tipped to take over from Virgil Abloh,” The Sun reported on December 8. “The pair are said to have masterminded the move... before Virgil’s death aged just 41.”

“They shared a similar vision and now Kanye feels he owes it to Virgil to continue his work at Louis Vuitton,” continued the paper's sole anonymous source — who isn’t reported to work for Louis Vuitton, its parent company LVMH, or Kanye himself. Those who are actually employed by the rapper haven’t responded to requests for comment, reports other British tabloid The Daily Mail. Given the lack of evidence, as well as the disrespectful timing, the rumor should be taken with a grain of salt. Until more trustworthy news emerges, there’s no way to tell who will replace Abloh as Louis Vuitton’s menswear artistic director.

An unlikely (and untimely) move — It’s true that, in the past, Ye had seemed envious of Abloh’s role: The rapper once said he felt the position should’ve been his, considering his past LV footwear designs and nickname “Louis Vuitton Don.” Yet as a close friend of the designer, Kanye quickly supported Abloh and his ongoing success. At the end of Virgil’s first Louis Vuitton show, the two embraced in a tearful, celebratory hug.

With the release of DONDA, new Adidas Yeezy designs, and Yeezy’s Gap collaboration, this year has also been one of Ye’s busiest. The rapper may not want to take on another role, especially considering he passed on similar opportunities at Givenchy and Bottega Veneta. If anything, West would assist his friend Demna, creative director at Balenciaga — owned by LVMH’s competitor, Kering — as the brand behind most of his (and his ex-wife, Kim Kardashian’s) looks.

Let’s ask LV — And in news directly from a trustworthy source, Louis Vuitton chairman Michael Burke told WWD that the remaining LV design team is capable of planning the luxury house's Summer 2022 runway show without a replacement creative director. “[The staff] don’t have to worry about June,” said Burke, suggesting that the search for Abloh’s successor would be a long, thoughtful process.

West may be involved in Louis Vuitton’s search for a new artistic director, but the brand is likely consulting him on potential hires, rather than offering him the job itself. Either way, it seems LV won’t have an answer for us soon.