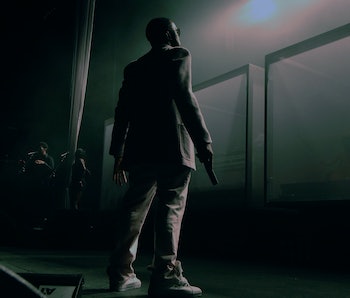 For many sneakerheads, cross-brand dressing is a sin. Nike and Adidas logos are not to be worn at the same time, because doing so would be like wearing Red Sox and Yankees gear together. No one’s expecting you to be as dedicated to one lone brand as you would a sports team, but the idea goes that your split allegiances should never be so sartorially apparent.

Kanye West, who is very much expected to be dedicated to Adidas and Adidas alone, apparently didn’t get the memo. Yeezy himself was spotted today at the Balenciaga Haute Couture wearing his Foam Runners, made in partnership with Adidas, along with black Nike crew socks.

The fit also included a full face mask similar to the ones West wore during the Yeezus tour, perhaps as an over-aggressive but still encouraging commitment to safety in the ongoing pandemic. Read differently, the shroud could also have been to hide the shame of committing such a foul — or for plausible deniability in regards to a possible violation of his contract with Adidas.

Kanye can’t let go — Despite famously leaving the Swoosh for the Stripes six years ago after feeling spurned by the American sports giant, it seems West still cannot quit Nike. Yes, Nike’s crew socks are superior to Adidas’ — but even the average sneakerhead will keep stock of both in order to avoid mixing logos so close together on-foot. If anyone could suffer through Adidas socks, or simply wear a pair from anyone else but Nike, you’d think it’d be the man who reportedly made $191 million from Adidas last year.

The sock scandal isn’t the only time West has made his continued love for Nike clear either. Late last summer, he went on Nick Cannon’s YouTube show and said: “In my Adidas contract, [I] definitely should be able to wear Jordans. Jordans need to be part of reparations. You can’t tell a Black man not to wear Jordans.”

Prior to committing with Adidas, West was constantly spotted in Air Jordans — from his favorite Air Jordan 8 “Aqua” to the Air Jordan 1 “Bred” he wore in 2011 at Burberry’s London Fashion Week show long before mixing sneakers and luxury attire became common practice. And while I’m too white to comment on the racial component of West’s quote, I can confidently say not being able to wear Jordans, the most crucial of kicks, would be difficult for any sneakerhead.

The money lining the pockets of the track pants West wore today and allowing him to do whatever the hell it is he’s doing on his Wyoming compound, however, should be more than enough to alleviate the pain. I’d probably quit Nike for the price of my student debt — but it seems no amount of financial flourishing as part of the Adidas family can make Yeezy move on from his ex.