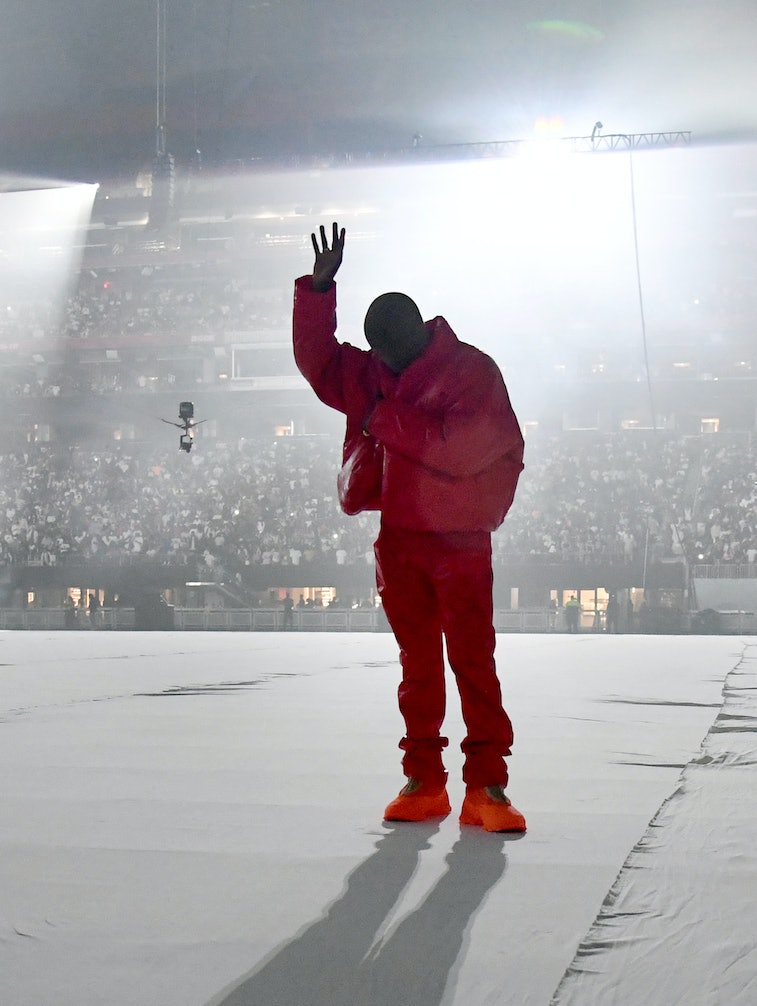 If you tune into Kanye West’s livestream on Apple Music right now, you’ll see the rapper taking a much-needed snooze. West had himself a busy night as he continues to work on his upcoming album Donda, and since the cameras began rolling yesterday he welcomed Chance the Rapper, Jadakiss, Vic Mensa, and others to visit his small room inside Atlanta’s Mercedes-Benz Stadium.

Throughout the course of his waking hours on the livestream, West underwent numerous wardrobe changes. A bulletproof vest, billowing white puffer, and spiked rubber jacket befitting of a Korn concert were all in rotation — and yet it’s a simple pair of black track pants that’s worth talking about most.

Nike’s logo can clearly be made out on the trackies West wore early this morning, transforming them from a leisurely pant choice to a source of controversy. Once again, West is crossing the Adidas company line and aligning himself with the brand’s biggest corporate rival. His flirtation with the Swoosh has become more frequent in the last month, and at this point you have to wonder if he’s intentionally trying to piss off the company that paid him $191 million last year.

Here we go again — West has stepped back into the spotlight recently, beginning with his attendance at the Balenciaga Haute Couture show in early July. It was there that he was spotted wearing his Adidas Yeezy Foam Runner with Nike Crew socks, a cardinal sin even for sneakerheads without multi-million ties to one of the two rival sneaker giants.

Soon after, West went into the promotional cycle for his forthcoming album Donda. In a commercial for both the album and Beats headphones that aired during the NBA Finals, the very first thing seen on-screen was a pair of Nike track spikes worn by Sha’Carri Richardson.

Now, not even two weeks later, West has once again worn Nike himself. Adidas has yet to publicly comment on any of the three instances, and perhaps the company has decided it’s best to just let Kanye do Kanye. He very well could be violating his Adidas contract, but punishing him or calling him out would likely only draw more attention and possibly push him to act out even further. Still, it’s worth asking — How long can West keep getting away with wearing Nike?