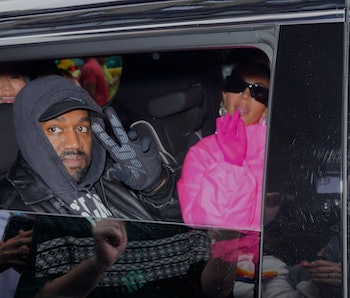 Just over a year ago, West used an interview with Nick Cannon as an opportunity to plead his case for wearing Nike, despite his Adidas deal reportedly earning him $191 million in 2020. “In my Adidas contract, [I] should definitely be able to wear Jordans,” he said. “Jordans need to be a part of reparations. You can’t tell a Black man not to wear Jordans. It should be in any deal. And also, you can wear your friend’s clothes.”

Whether or not Adidas has signed off on West engaging in sportswear treason remains unclear, but he’s gone ahead worn the Swoosh numerous times this year without any apparent consequences.

Kanye’s Nike dossier — West famously left Nike for Adidas in 2013, and up until this year he’d been good about staying faithful to his partner in Yeezy. That all changed in June, when West committed a cardinal sneakerhead sin by pairing his Adidas Yeezy Foam Runner with Nike crew socks.

Soon after, West sported Nike trackpants during a livestream of the making of his album Donda. Then, in a commercial for the album made in conjunction with Apple Music, the very first shot featured a pair of Nike track spikes before the camera panned up to reveal Nike runner Sha’Carri Richardson. The primetime slot would have been impossible for Adidas to ignore, as the slot debuted during the NBA Finals.

The last time West had been spotted in Nike was in late September, as Heron Preston posted a photo to Instagram featuring Kanye wearing his collaborative Nike gloves. That was actually the lone time he wore his friend’s clothes, and we’ve yet to see West wear the Air Jordans with which he made his passion for clear. At this point, it feels like West would have to burn a pair of Adidas sneakers while wearing Nike in order for the brand do do anything about his flouting of allegiances.