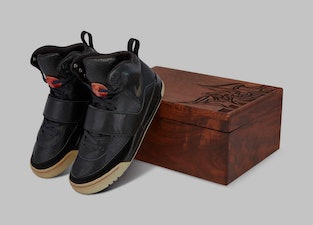 How much they sold for.

Yeezy has truly jumped over Jumpman, as the most expensive pair of sneakers ever sold now belongs to Kanye West — or rather used to.

A one-of-one Nike Air Yeezy sample worn by West to the 2008 Grammy Awards sold for $1.8 million through a private Sotheby’s sale, setting the new record for the world’s most valuable shoes. Previously, a pair of game-worn and autographed Air Jordan 1s from 1985 held the record with a final price of $560,000. What made that particular pair rare is that they were mid-cut, instead of high-tops or low, which were made for Michael Jordan to play in but never sold to the general public.

The new record-holding sneakers were the first pair of Air Yeezys ever seen by the general public. After rumors had been circulating of West collaborating with Nike, he debuted the early prototype at the Grammys a year before the Air Yeezy 1 would go on sale to the general public. Nike was so concerned about secrecy that West was instructed to send the sneakers back to company headquarters as soon as the night was over.

The kicks have changed hands a few times — 11 years ago, this Air Yeezy sample sold for a fraction of what it’s worth today. Nike auctioned the pair on eBay in 2009 as part of a fundraiser for the Doernbecher Children’s Hospital, and six years later the sneakers sold for a set price of $75,000.

The previous owner prior to the Sotheby’s sale was Ryan Chang, a renowned sneaker collector and founder of Applied Arts. His company views sneakers the same as others would fine art, and in a 2020 Artnet interview Chang said, “The same date points that inform quality for art inform quality in the luxury collectibles segment — scarcity, the artist, cultural relevance, and aesthetics.”

Can a sneaker really be worth $1.8 million? — While aesthetics aren’t nearly as key for the Air Yeezy sample — it’s not nearly as interesting to look at as the sneakers that eventually went on sale — the former three components are essential for understanding why the shoe sold for so much.

Kanye West and Nike set the stage together for our modern sneaker landscape, and you’d be hard-pressed to find a more anticipated sneaker than the original Air Yeezy. Nike had previously been averse to giving signature shoes to non-athletes, and the fervor created by West is why Travis Scott is now a pivotal partner for the brand. Still, West felt as if Nike didn’t acknowledge his value properly — and that feeling of being shunned led to the rapper crossing sides, joining Adidas, and turning the Yeezy into a brand now worth billions.

As Applied Arts put it on Instagram, “very few objects have captured the cultural moment so perfectly.” Regardless of whether you think a sneaker could be worth so much, someone clearly thinks $1.8 million is an appropriate mark for such a seminal sneaker.