No one knows how much Kanye West is actually worth 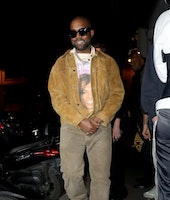 That's what all of his business endeavors are valued at in 2021.

For those that miss the “old Kanye,” new Kanye is doing just fine — like, billion-dollar fine. But don’t get it twisted: Ye isn’t the richest Black man in U.S. history, as previous reports have claimed, and it seems no one actually knows what the rapper and designer is worth, given reports from Bloomberg, Forbes, and The New York Times all contradict each other.

A Bloomberg article posited that Yeezy, West’s sneaker and apparel business with Adidas and Gap Inc., is valued at $3.2 billion to $4.7 billion. Bloomberg also reported that West’s upcoming Gap collaboration could be worth as much as $970 million. While that’s a lot of cash, it doesn’t automatically transfer to West’s own net worth, which Forbes estimates is closer to $1.8 billion. Prior articles that cite Ye’s net worth as $6.6 billion are inaccurate, Forbes said.

So how rich is Kanye? — Reports from People note, however, that the rapper has money in the bank, with $122 million in cash and stock and $110 million from his music catalog. Business investments, including soon-to-be-ex-wife Kim Kardashian’s SKIMS line and possibly the Friesian horses, account for $1.7 billion in other assets, People reports.

Both the Bloomberg story and People story are based on a report on his businesses from banking firm UBS, which Forbes claims it saw earlier this month. According to the business publication, the bank made a number of assumptions based on projected future earnings, particularly for Yeezy Gap, which hasn’t even launched yet. Forbes says bank documents like this are well known for painting best-possible-scenario future valuations, and the numbers are only projections, not fact.

Here’s the poopy-di scoop — West has been working hard on his Yeezy footwear recently, making us think rent was due instead of well-accounted for. His first basketball shoe with Adidas has returned, alongside new shades of his perforated Yeezy Foam Runner. West’s hustle seems to have boosted his label — depending on which report you read — which he solely owns and creatively controls.

Last year, Ye signed a 10-year agreement to design and sell clothes for men, women, and kids under the Yeezy Gap label. Shoes are excluded as West’s Yeezy footwear partnership with Adidas runs through 2026. Bank documents obtained by Bloomberg reveal that Gap expects West’s upcoming clothing and apparel collection to break $150 million in sales in its first full year in 2022. The company also sees it becoming a billion-dollar revenue brand within eight years, with the potential to exceed $1 billion as soon as 2023.

Forbes, though, says we need to stick to grounded numbers, and the “old-fashioned idea of current revenues — not theoretical future expectations.” Yeezy Gap has brought in no revenue yet, let alone any profits. Although Ye’s name will definitely bring hype to the brand, value isn’t guaranteed.

What is the truth? — Forbes has taken it upon itself to correct these numbers, and has broken down its estimate of West’s net worth — which the publication notes is still quite impressive, even if it’s not “as high as [Kanye] wants, or thinks, it to be.” According to Forbes, Yeezy is actually worth $1.5 billion, West owns $160 million in other assets, his music catalog is worth $90 million, his SKIMS stake $64 million, and Gap x Yeezy is worth zero.

That’s rough, especially coming from a publication that Ye once claimed was trying to “snub” him when reporting on the rapper’s net worth. And Forbes’ report conflicts with Bloomberg’s predictions and now, an article in The New York Times claiming West only earns 5% royalties on net sales for his Adidas deal.

We can’t tell you who’s right — only Kanye knows the real deal, and we doubt he’s willing to tell us the truth. Amid his divorce from Kim Kardashian, we assume the rapper and designer is trying to downplay his net worth as much as he can (maybe Forbes is doing him a favor this time).

That said, we know Ye hasn’t always been good with money. In 2015, he told BET he was $16 million in debt, and a year later, he said he owed $53 million, even asking Facebook founder Mark Zuckerberg to invest in him. We think he’s definitely doing better, financially at least, than most of us at the moment, and we’d kill to be in his shoes — not Yeezys, but the rich people kind.