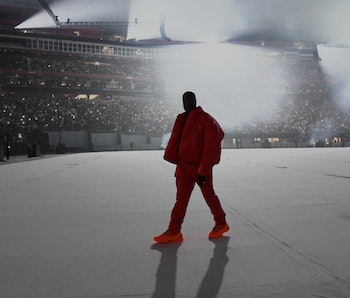 Kanye West’s highly anticipated Yeezy Gap era began in June, when at two in the morning, he dropped a $200 pre-order for a blue puffer coat. The jacket, to no one’s surprise, sold out instantly, as did the pre-order for a black iteration released in July. Each one produced $7 million for Gap “overnight,” according to the brand’s former CEO Mickey Drexler — who says Gap shouldn’t have partnered with West’s Yeezy, no matter the profit.

“So, I know the jacket sold out. They did $7 million on the jacket overnight,” Drexler said in an interview with Yahoo Finance Live. “[Kanye] is a smart guy but he shouldn’t have done it. And I don’t think [Gap] should have done it, either.” Perhaps referencing West’s loose loyalty to Adidas, which produces the artist’s Yeezy line, Drexler said that working with the brand long-term “doesn’t work for someone like Kanye.” He “isn’t a corporate person,” according to Drexler, “and Gap is a big corporation.”

Haters gonna hate — Drexler, who oversaw Gap from 1983 to 2002 after being recruited by the company’s founder, is widely credited for its success in the ’90s. He only left the brand after a slump in sales — and a clash in management styles — reportedly forced him out of his CEO position. Still, Drexler maintains he has friends at Gap, telling Yahoo Finance Live that, “I probably shouldn’t say this but I told [Kanye] he shouldn’t do the deal because it doesn’t make any sense in my opinion.”

Sales — and obviously Kanye — disagree with Drexler. Demand for the two puffer jackets, the only appeal of which may be their Yeezy label, has caused the $200 pre-orders to sell out instantly and resell for upwards of $500. And Gap, which has fallen behind trendier labels like Urban Outfitters and Nike, arguably needs the profit West is bringing in through his 10-year Yeezy partnership.

Bad blood — The former Gap CEO, other than stating West wasn’t “a corporate person,” didn’t give much reason for why else the artist shouldn’t work with Gap, prompting some newsreaders to suggest he was jealous of the company’s success. “As an investor you care about profits… there are no emotions in business,” said a commenter on Hypebeast, who identified themselves as a double business major. Comments on Yahoo News’ story read, “[Drexler’s] reasoning isn’t explained,” and “he’s so oblivious to his racism.”

Regardless of Drexler’s underlying message, Yeezy Gap will likely continue to prove him wrong. Already, West has been spotted wearing a third puffer jacket from the line, which may be available for pre-order soon — what are the odds we see Drexler donning one later down the road?