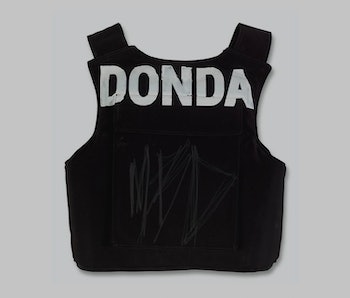 Going once, going twice, sold (again). The legendary auction house Christie’s struck the gavel at a $75,000 bid for Kanye West’s signed Donda vest. The piece originally sold back in August to Justin Reed for $20,000, a collector’s item that was eventually turned into a one-of-one NFT for the auction.

A gift that keeps on giving — The vest and its accompanying NFT made their way from Reed’s LA consignment shop to none other than Christie’s “Handbags x Hype” Auction where it sold to the highest bidder.

The vest appeared to be in good company, joining the likes of other luxurious hype pieces from Off-White Nikes ($62,500) to Yeezy 350s ($37,500) to a Supreme pinball machine ($52,500). Overall, proceeds from Christie’s Luxury Remix auction reached just shy of $3 million, with this being the first time in the department’s history that cryptocurrency was accepted as payment.

The vest’s journey to consignment began at Kanye’s second Donda listening party at the Mercedes-Benz Stadium in August. Rumor has it, the rapper signed and gifted the hand-painted vest to a security guard working that night — who was apparently willing to part ways with it at the right price. Kanye’s scripted “MBD” on the vest stands for “My Body Different,” the security company covering the listening party, while the NFT serves as a digital representation of what went down that night.

Ye’s loyal followers — The bulletproof Donda vest is definitely on the pricier side of concert and musician merch, though Kanye’s fanbase is one that proves to ride or die, emotionally and financially, for the experimental rapper. The piece isn’t just for sentimental fans, it also grabs the attention of general art collectors and those who want — and can afford — to own a piece of pop culture.

No matter what Kanye does, anything that belongs or has belonged to him, like a worn pair of Yeezys, can become a collectible. Overpriced tickets, simple merch, and late appearances don’t seem to faze his supporters, instead adding to his misunderstood, tortured artist persona. The vest, a testament to his mother’s namesake album and his ability to survive on the essentials as we saw from the cell-like Donda studio, contributes to the mystery.

If you truly want to self-express with Donda merch, you could always find a vest lookalike or breathe a bag of concert air. Just sayin.’