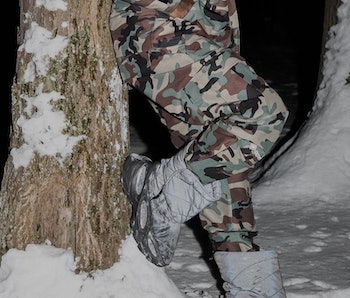 Yeezy’s pillow-like NSTLD boot is dropping again soon, this time in a reflective gray palette. Migos member Offset teased a pair of the slippers in an impromptu photoshoot posted on Instagram, showing off the unreleased boots in snow. It’s the first time the winter shoe has been seen in actual winter weather.

The NSTLD boot first made an appearance as part of Yeezy’s Season 8 show at 2020’s Paris Fashion Week, although it didn’t release to the public until last November, when it debuted in a khaki color. The quilted model offers a bit more structure than Yeezy’s other winter footwear thanks to a cage affixed to the midsole, which boasts a shape similar to the slipper’s summer counterpart, the Foam Runner. And with an upper reminiscent of a puffer jacket, the NSTLD boot actually seems warm and functional — at least, it does in Offset’s snowy photoshoot.

Shine bright like a Yeezy boot — In the rapper’s carousel of photos, the boot bears a full hi-vis reflective upper, which shines bright in exposure to the camera’s flash. Its gray upper is accompanied by a darker gray midsole cage, which wraps around the bottom of the shoe with ridged spikes to give the shoe some grip on ice and snow.

Yeezy previously marketed the NSTLD boot as waterproof, a claim that doesn’t hold up as much in Offset’s photos. The footwear’s nylon-esque upper shows dark splotches where it’s been exposed to the wet ground, and the boot’s cage sole has collected pockets of snow. Still, it’s possible the fabric is sensitive to the weather while maintaining a dry and warm interior.

To match the outdoor theme of the unreleased Yeezys, Offset paired the boots with a woodland camo GORE-TEX shell jacket and pants from Stüssy, making sure to add a Supreme polar fleece balaclava to complete the hype look. The rapper’s wife Cardi B commented in approval, calling the NSTLD boots hot with multiple flame emojis.

Do you need the NSTLD? — Neither Ye nor Adidas has announced the launch of the reflective NSTLD boot, although Offset’s seeding could hint at an upcoming drop at Yeezy retailers and Adidas’ Confirmed app. Expect demand to be more insatiable than usual: Plush pairs of the footwear are reselling for over $1,600 online, despite their original $250 price tag.