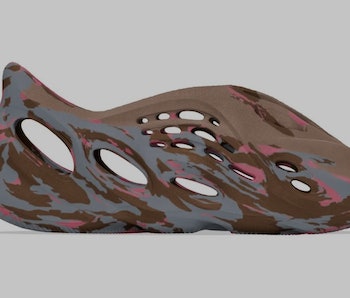 Yeezy’s insulated Knit Runner Boot may be the most appropriate model for the winter months, but that won’t stop the brand from releasing another version of its perforated Foam Runners. According to Yeezy Mafia, the popular slipper will be returning in a new color next month. Based on mock-up images shared by the Yeezy source, the forthcoming foam clog features a combination of gray, brown, pink, and blue shades for a tie-dye effect.

While many were quick to judge the bizarre-looking Yeezy Foam Runner — made of a sustainable algae-based foam — the silhouette has quickly garnered a following, with each release not only instantly selling out, but also reselling for over five times its $80 retail price. Better pray to Yeezus you can cop the upcoming pair, as it’s the only Foam Runner slated to release for a while.

One-of-a-kind — Taking on the same design as its predecessors, the multicolor “MX Sand Grey” Foam Runner is covered mostly in gray, brown, and stony blue shades. Pink details are splattered throughout the upper. Featuring the model’s signature oval perforations on the heel and midfoot, with smaller holes near the tip of the shoe, the clog offers a breathable fit — ideal for slipping on and off throughout the house.

Much like the previously released “MXT Moon Grey,” the “MX Sand Grey” pair offers a marbled look; something Yeezy Mafia says is evident by its “MX” label, which refers to its randomized color scheme meaning no two pairs look the same. The clog’s one-of-a-kind pattern proves more valuable to hypebeasts chasing exclusivity, as well as resellers trying to flip the clog for profit.

Currently, pairs of the “MXT Moon Gray” Foam Runner are reselling for up to $550 — nearly seven times its $80 retail price. If you’re wanting a pair of the Yeezy slippers, your cheapest (and most trustworthy) bet is through official retailers — but you’ll have to fight through bots, resellers, and thousands of other fans.

Dropping soon — Yeezy has a growing list of shoes dropping at the end of this year, but the “MX Sand Grey” Foam Runner is the only one of its kind releasing. Look out for its launch in December at Adidas’ Yeezy website and select Yeezy retailers. The Foam Runners should cost their usual price of $80; a true deal if you’re able to cop a pair.