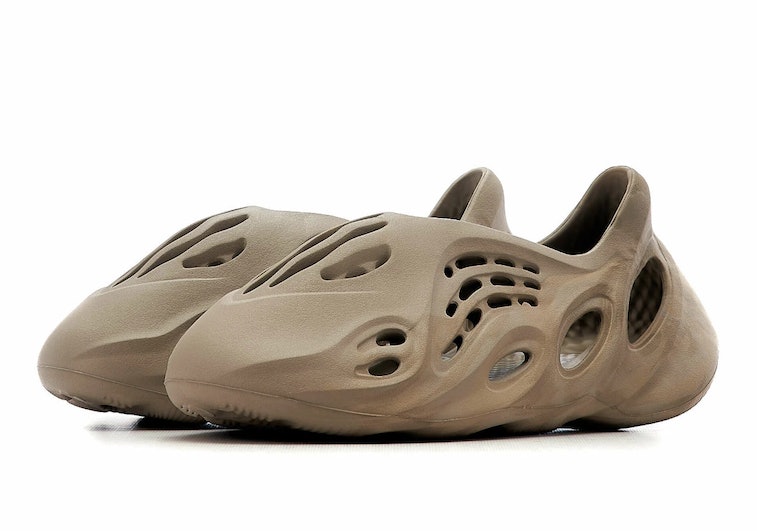 Kanye West is handling his divorce with little grace and a lot of Yeezy drops: This week, the rapper’s Adidas label is gearing up to release a pair of Foam Runners, each decked out in the brand’s signature neutral tones. The first of the two, dubbed “Mist,” takes on a light brown tone, while the second, called “Stone Sage,” opts for a subtle marbling of gray hues.

Yeezy has tried to satiate fans with a generous amount of restocks and new drops in the past few weeks, with 14 models expected from the brand this month alone. Classic sneakers, like the “Safflower” Yeezy 700 V3 and “Waverunner” Yeezy Boost 700, are dropping alongside Yeezy Slides, Desert Boots, and of course, more Foam Runners — ensuring everyone except maybe Pete Davidson is able to cop the Yeezys they want.

What to expect — Both of the forthcoming Foam Runners feature the model’s signature oval perforations throughout, with smaller holes at the toe for extra breathability. While the “Mist” iteration stays tonal, the “Stone Sage” version boasts a barely-visible camouflage pattern near its heel, reminiscent of past “MX” or “mixed” Foam Runners. The subtle marbling detail is randomized, meaning no two pairs are the same.

Each slipper is made of an algae-based foam, making the Foam Runner both sustainable and comfortable. Although most people categorize the shoes as strictly for chilling around the house, their lightweight fit makes them great for running errands too — and it’s always worth flexing weird Yeezy silhouettes.

The Foam Runner in particular has garnered a following largely due to its bizarre shape. Since the slipper debuted in 2020, each of its releases has promptly sold out, and the $90 shoe can be found on the resale market for over 10 times its retail price. Hypebeasts will likely be accompanied by resellers during the upcoming Foam Runner drop — and those unfortunate enough to miss out will have to shell out up to $1,000 for the slipper or go without.

Dropping this week — A release for the “Mist” and “Stone Sage” Foam Runners is lined up for March 11 at 11 a.m. ET, available exclusively on Adidas’ Confirmed app. Adult pairs will retail for $90 — a recent price hike from the slipper’s usual $80 — while kids’ pairs will run for $65. Even the tiniest of hypebeasts can join the drop, as infant Foam Runners will retail for $45. Whether you’re bold enough to deck your whole family out in Yeezy is up to you.