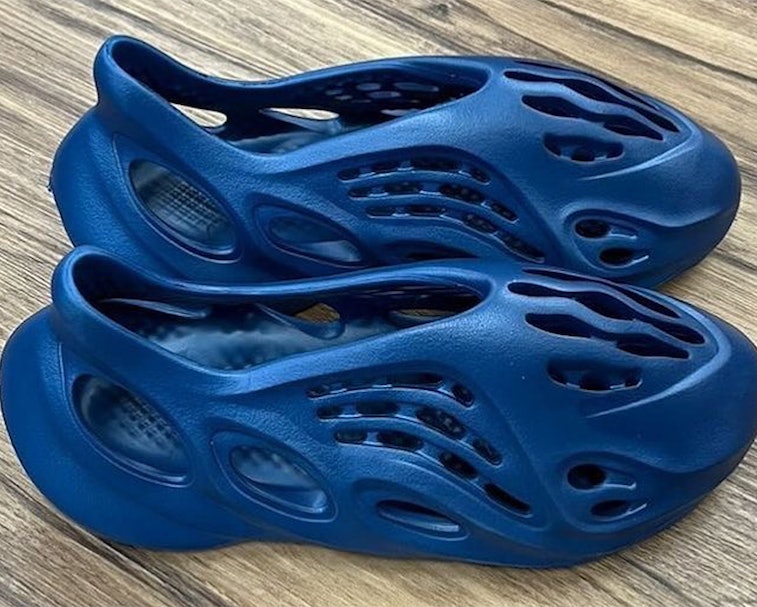 It seems Yeezy is dipping deeper into the color wheel in 2022. The brand’s Foam Runner appeared in a navy shade that would match the blue Yeezy Gap puffer jacket perfectly.

This would be the brand’s eighth iteration of the Foam Runner, which ranges from its traditional earth-toned, utilitarian shades into more conceptual schemes like “Vermillion” and a swirled “MXT Moon Gray.”

Kick the January blues — The sneak peek of the newest version comes at the hand of sneaker reseller @Beefkix and offers a glimpse at an upcoming Foam Runner that adopts the Yeezy Boost 350 V2 “Dazzling Blue” accent color. The tone coats the entire shoe in typical Yeezy fashion and even features a shiny coating. Even so, it’s hard to tell whether the metallic finish is exclusive to this release or just an effect of the lighting.

Yeezy Foam Runners and Slides are known for their house shoe reputation, whether that stands because of their lightweight, slipper shape or any flush of embarrassment from wearing them in public. For those still on the fence about investing in the alien-like slipper, be consoled by the EVA foam material that adds comfort to the rigid silhouette. It even boasts a sustainable edge from the harvested algae used in the shoe’s DNA.

No release in sight — Thanks to insight by sneaker insider @die_sel666, the latest Foam Runner is just a sample and doesn’t have any official release information. In terms of numbers, existing Foam Runners range from $184 to $550 on StockX, a significant upcharge from their $80 retail price.

Foam Runners are one of the most popular — and replicated — Yeezy releases since it launched in 2020, despite the jokes that stem from their chunky design. Somehow Yeezy makes it work, staying relevant on the feet of wearers everywhere. If the blue Foam Runner does make its way into an official release, you can bet the tried and true Yeezy fans will be first in line.